Today I discovered that I like running on trails.  This morning I read an article in the monthly town newspaper about the New Boston Rail Trail.  I was planning to complete my run along the main road in town, but the trail sounded better... 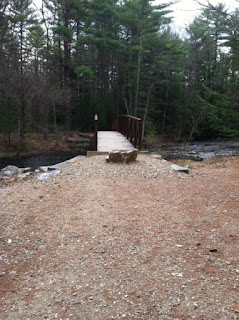 A deserted railroad bed from the Boston-Maine Rail line has been converted into a trail that makes a perfect location for long runs.  The trail runs parallel to the river approximately four miles to the neighboring town line.  Instead of running along the road dodging and worrying about traffic, you can cruise along the path and through the trees, listening to the birds and the flow of the river.

About three miles down the path is an 80' footbridge that spans the river.  It was built using the original granite abutments from the rail line.  Crossing the arching timber decking connects you to the second half of the trail path.  It is a beautiful sight.

Running on the trail was amazing and it made me think about the children's story, The Little Engine That Could.  Running or more specifically running in New England has been my mountain.  I have been doubting my ability at times to increase the distances and conquer the hills. Today was a day where I got to say, "I knew I could, I knew I could" because I completed a six mile run that felt smooth and easy.  My hard work and determination, mixed with a little optimism, made me the little engine.
Posted by AmyC No comments: Links to this post

I started using the Nike+ sensor in 2008 after a friend gave it to me as a birthday gift.  A few days ago, after syncing my run on Nike I received a video notifying me that I have logged 500 miles using Nike+.  I consider myself a competitive person and I have fallen in love with the ability to sync my runs and login to the website to SEE my results.  I get a thrill out of joining challenges, setting goals, and using the Nike coach program to train.  Seeing my results posted keeps me motivated and is a little internal reward to myself even if no one else is particularly interested.

The Boston Marathon is tomorrow and we are planning to be at the starting line in Hopkinton, Massachusetts to cheer on the runners.  Despite the fact that I am not a marathoner, I am inspired by the dedication and sacrifice these runners have given to their passion.  This year as I am attempting to become a new england runner, I am learning what it takes to be a true runner - to follow a schedule, put in the miles, and to face the hills.

My run today certainly did not include Heartbreak Hill, but I did face supreme wind gusts that shook my pace by about 30 seconds.  The 5 mile route was a new one that I sweet-talked my husband into joining me on so that we could enjoy the beauty of the river while we ran.  The first half of the run was just like drifting along with the flowing river - relaxing, rhythmic, and effortless.  After the turn-around, it became a battle against the current.  The tumultuous winds were like fighting upstream against the rapids.  Another test in my training quest. I conquered.
Posted by AmyC No comments: Links to this post