November 13 - Today was a beautiful day to run across the Newport Pell Bridge in Newport, Rhode Island. The Veteran's Day Weekend event benefitted several local charities and gave participants the chance to experience spectacular views.  This was the first time in over 25 years that runners were able to run across the bridge since its opening in 1969.

Beginning at 5 AM shuttles transported over 2500 registered runners from downtown Newport to the other side of the Narragansett Bay into Jamestown.  Using bibs as boarding passes, we were loaded into the rented school buses.

The starting line and waiting area was prepped with coffee, water, bananas, port-a-potties and MUSIC.  Standing around in the pre-dawn darkness, people were talking, laughing, and bopping to the lively tunes being DJ'd.  It was hard to remember that we had all probably crawled out of bed before 4 AM. 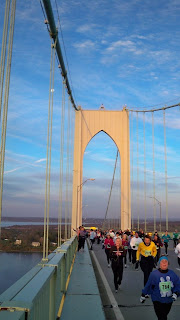 Daylight reached its peak as the first runners made their way through the Rhode Island Turnpike and Bridge Authority toll station.  Runners occupied the two lanes of eastbound traffic, while motorists making their way between Jamestown and Newport had to share the remaining two westbound lanes.

Along the way, everyone took advantage of the opportunity to capture the breath-taking views of the sunrise, the Narragansett Bay, and the bridge itself.  It was so amazingly beautiful that I quickly forgot about the chilly breeze and the impressive incline as we made our way to the midway point of the bridge.  Crossing the bridge took just over two miles out of our four mile run.

Coming into downtown Newport after crossing the bridge, runners were met with cheers and clapping from spectators lining the streets leading to the finish line.  The finish line area gave runners a chance to mingle with friends and family while munching on the yummy blueberry bagels from Panera.

On a picture perfect November day, I not only crossed the finish line of another race, but also got to cross over an iconic landmark.  The Newport Pell Bridge is the longest suspension bridge in New England.  Every time we go to Newport, I will probably get chillbumps thinking about where I was at 6:30 this morning!