Moderately hard = hard work, but totally worth it!

That's what we would say about the Wiliwilinui Ridge Trail. This hike went on our list because it has amazing views. 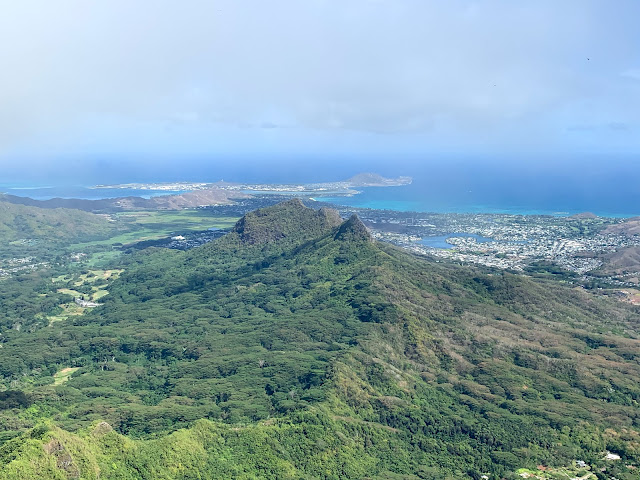 This trail is popular, but because the trail head is located inside an affluent Honolulu community, it probably never really gets crowded. Which is good because it's an out and back. We decided to go on a Friday morning to avoid the weekenders and I think it worked. We checked in with the friendly guard at the gate to Waialae Iki, who took down our license plate number and gave us a parking pass, and made our way through the neighborhood to the trail head parking area. 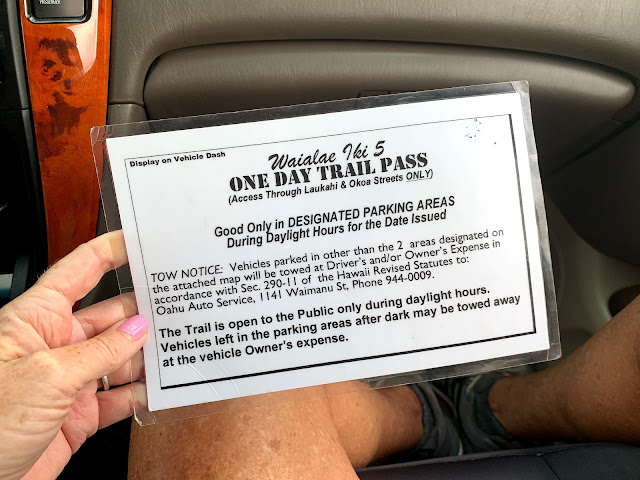 They have some amazing views in this community! 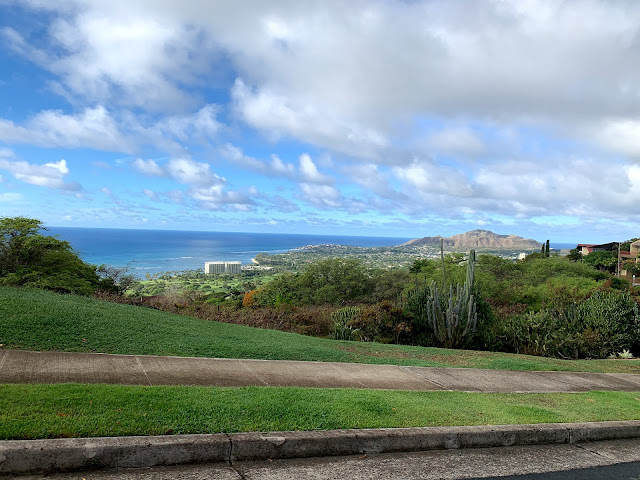 We were the 6th car to arrive. It was a short walk down the street to the trail which starts off as the access road for the water department. It quickly turned to gravel, which is actually hard to walk on and then the typical Hawaiian red dirt. 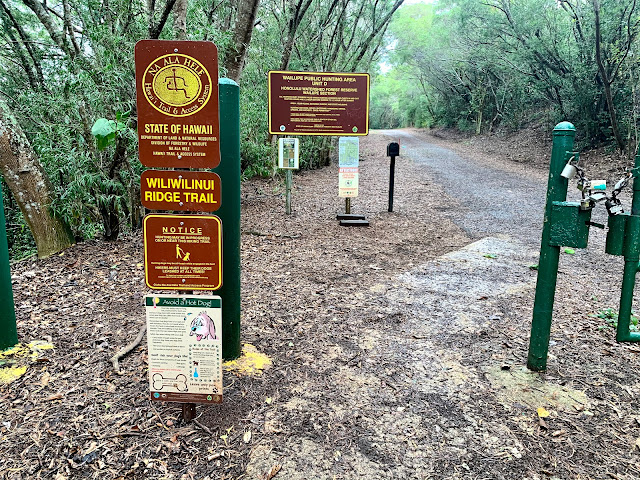 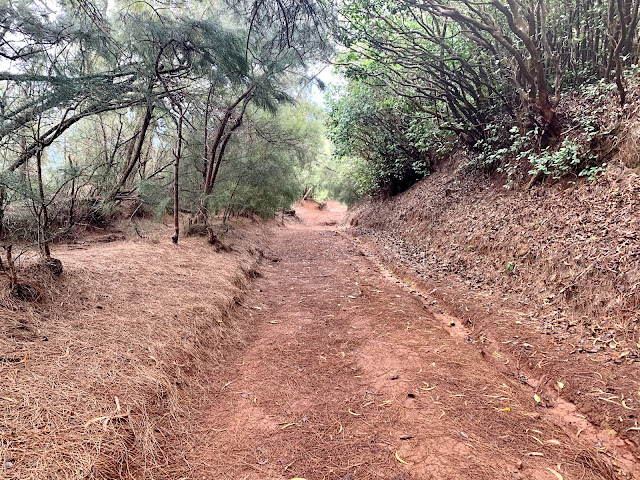 Although there were clouds lingering on the ridge that we hoped would scatter by the time we made it up that far, it didn't take long for us to get some views of what was to come. I'm pretty sure those clouds were also keeping all the humidity packed in on us. We were sweating! 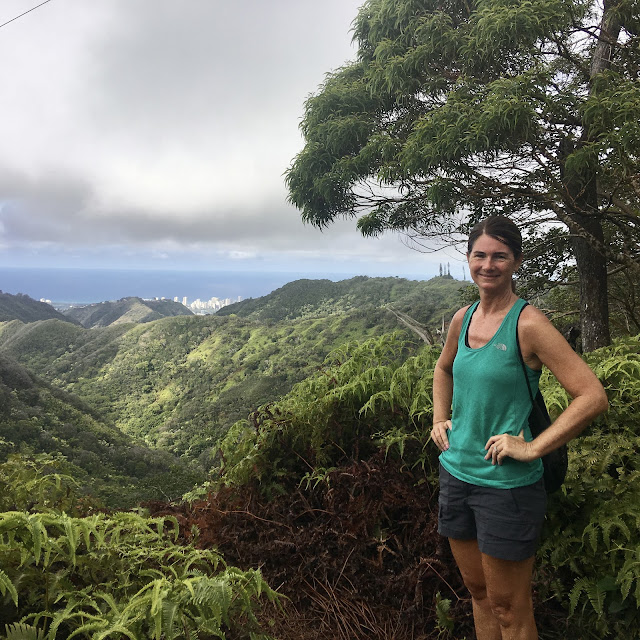 The first part of the hike is best described as a slow and steady climb. Fortunately, there were plenty of places to stop and take peeks at the views that continued to get better and better. 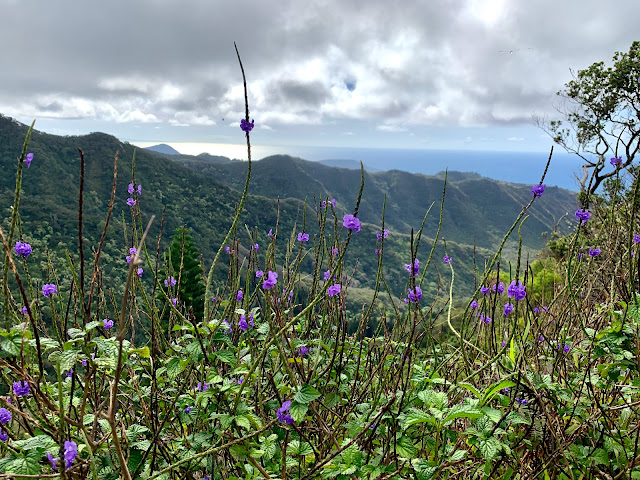 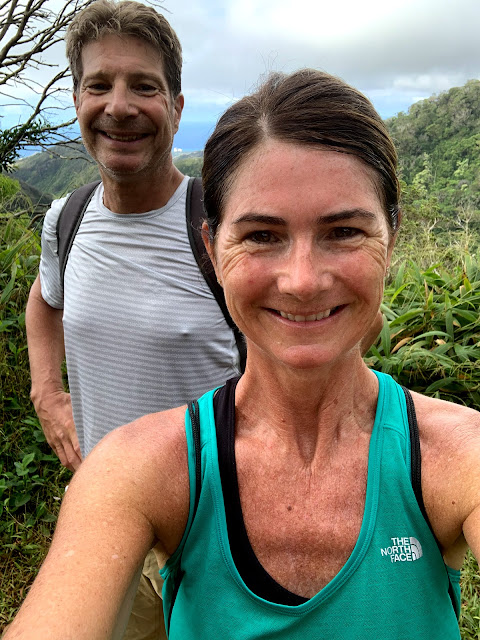 We knew that the real fun began when we made it to the first of a series of steps - created to help hikers and erosion prevention. 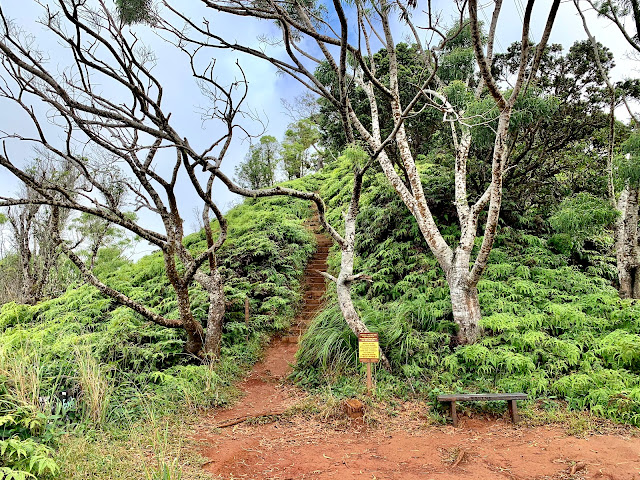 I tried to count how many different sets of steps we came to but lost track. The trail would dip and rise in between and eventually the steps became a little more intimidating. 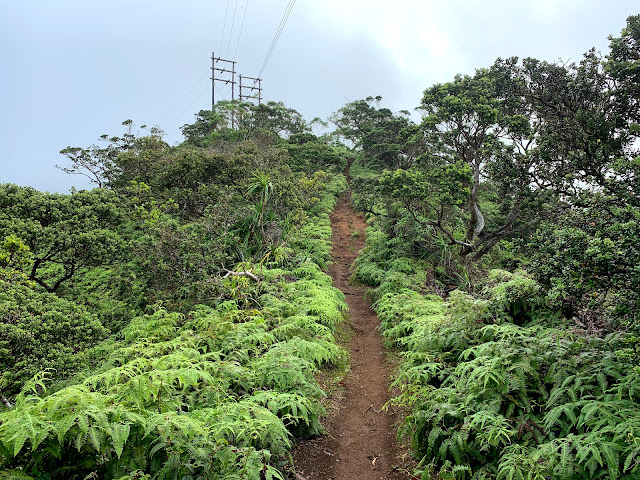 Every so often we made it to electrical towers. The openings here were a great space to take a break and take in the views. 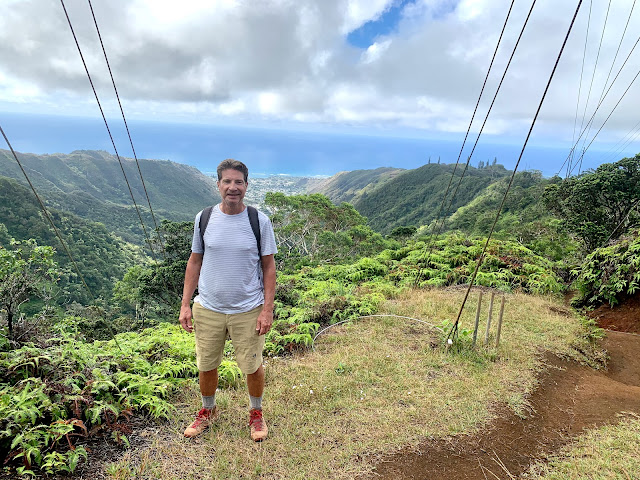 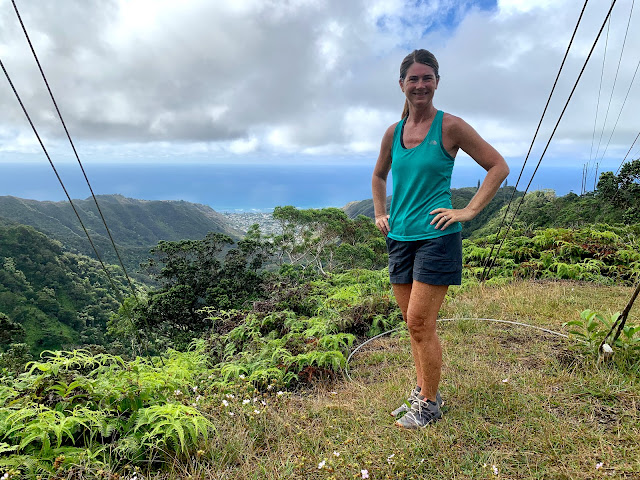 We used the All Trails app to track ourselves, but that didn't stop us from looking up and thinking we were almost there several times. The clouds blocking our view of the summit kept playing tricks on us. 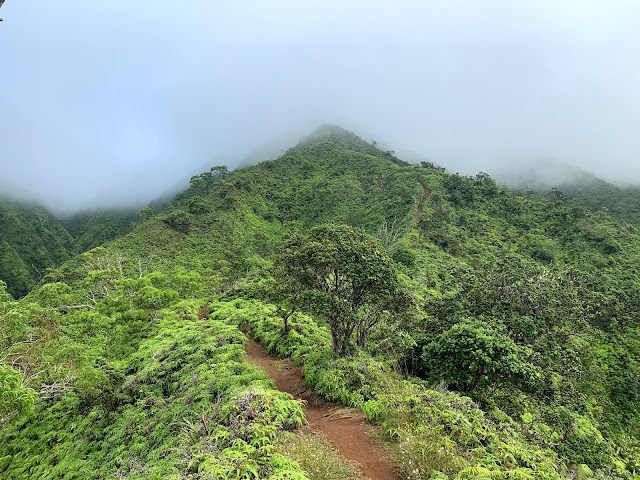 The higher we got, the more it looked like the clouds were going to cooperate and make their move out of the valley. 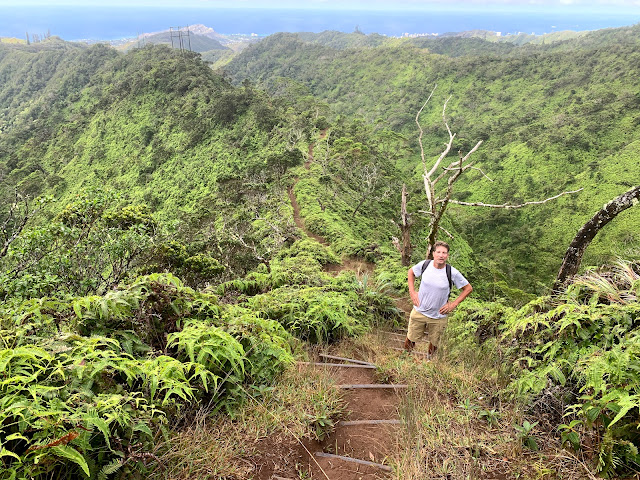 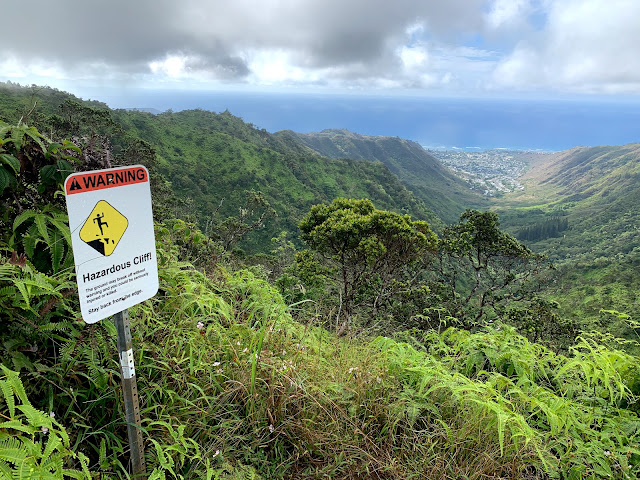 Some spots along the trail were challenging and required using a rope to pull ourselves up. The ladders were convenient, but a little scary climbing up on the side of the ridge. 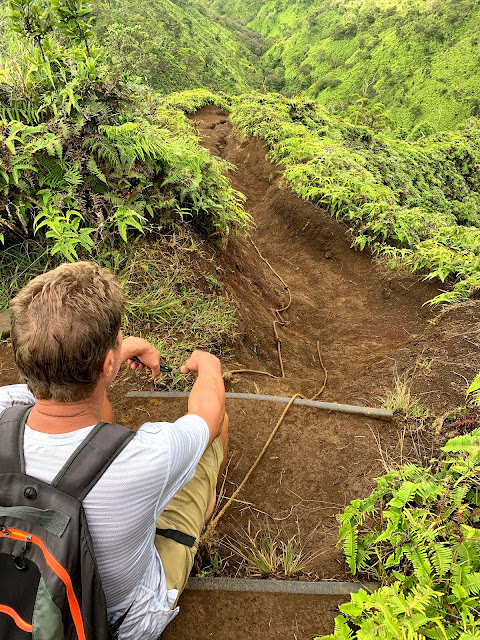 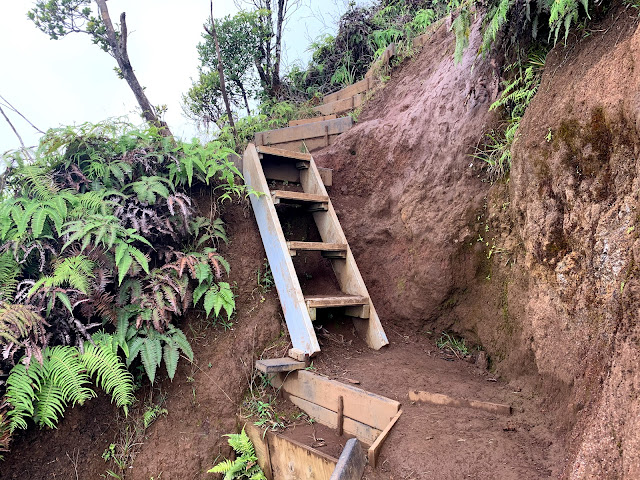 The closer we got to the top, the more the clouds cleared, which was good news for us. We didn't want to climb all the way up and miss out on the views. 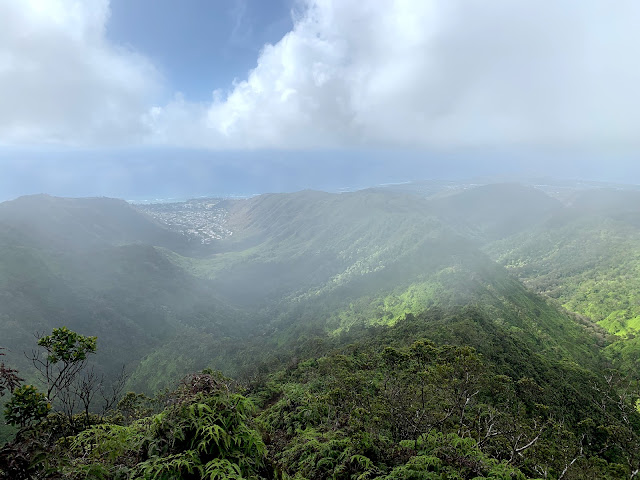 After a final push to the top, we were at a tower but not quite at the summit with the 360 degree views. We had to walk to the left of the tower and follow the trail just a little bit more. Finally we spotted the end of trail sign and a single bench to sit on. We took a break there and waited for the clouds to finish blowing by. 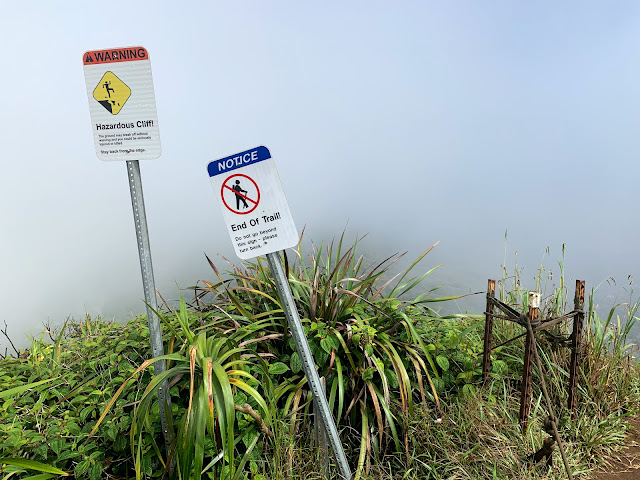 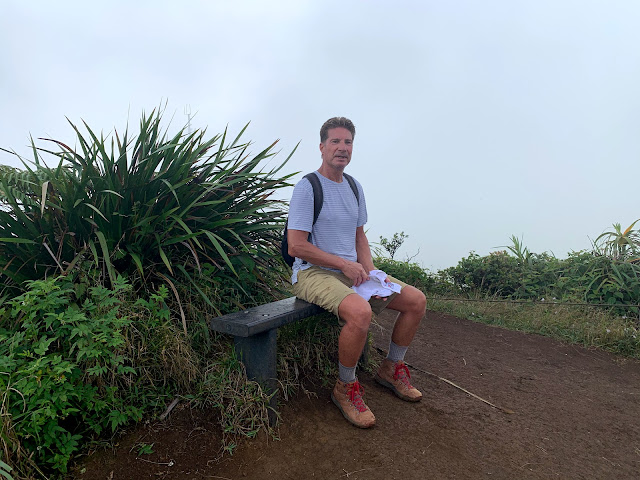 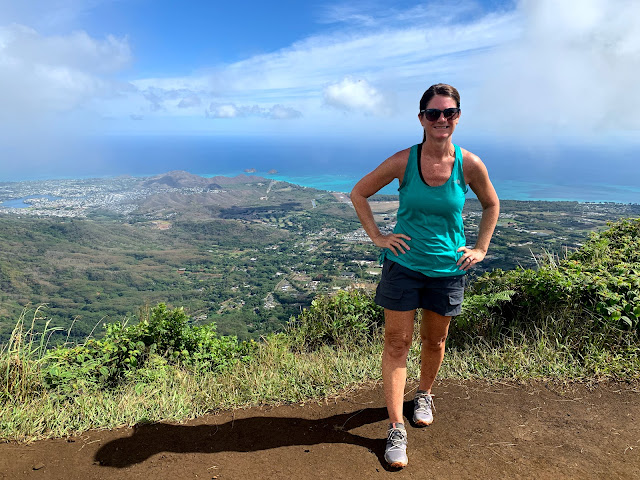 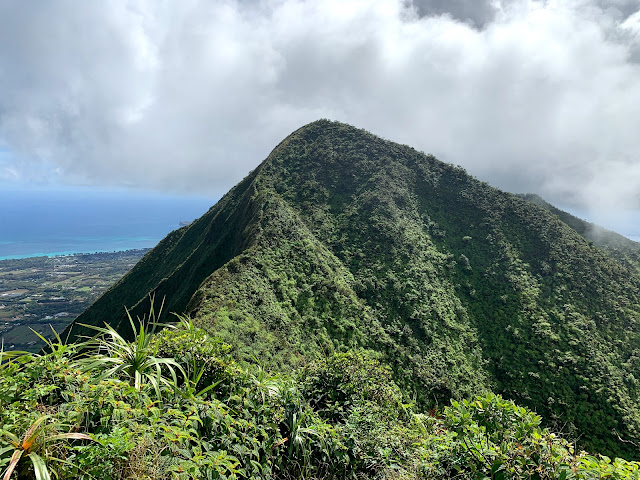 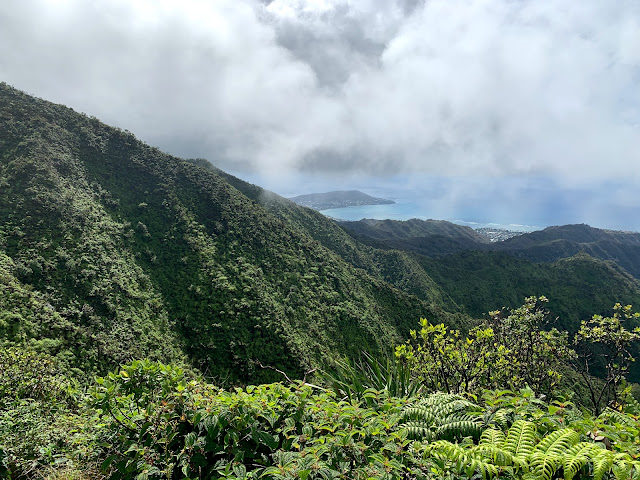 Once the clouds cleared, we took our time taking in the views. We spotted Kailua in the distance, Bellows AFB, Flat Island where we swim to and the Mokes. Right before heading back down, we decided to take a selfie on a timer and got swarmed by a bunch of gnats! 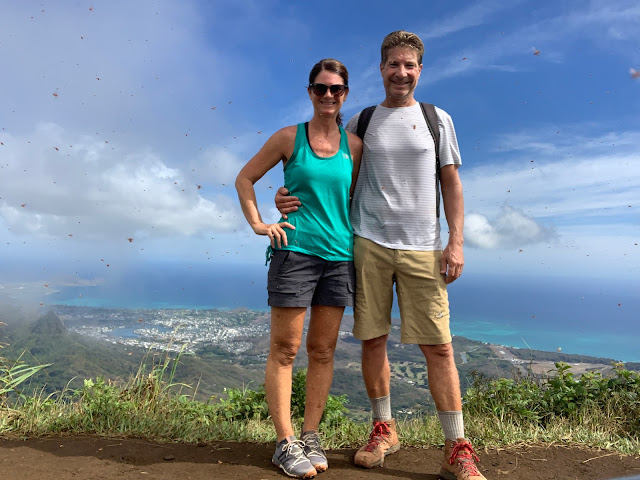 Going down wasn't as difficult as I thought it would be, thanks to mrC helping me. Even though the clouds lingered just above us, the views were even more amazing on the way down. I loved seeing Diamond Head and Waikiki in the distance. 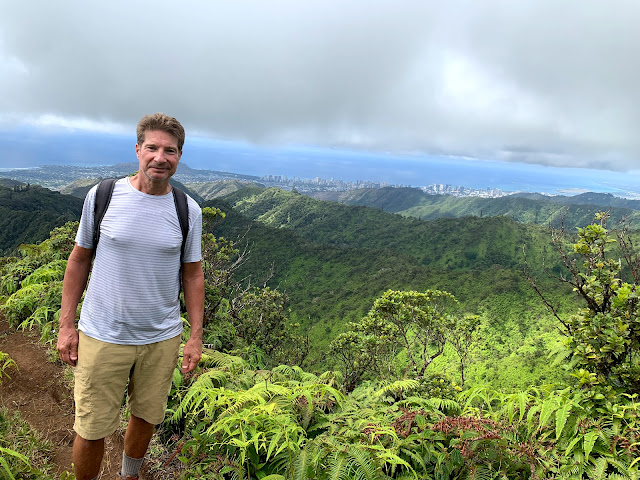 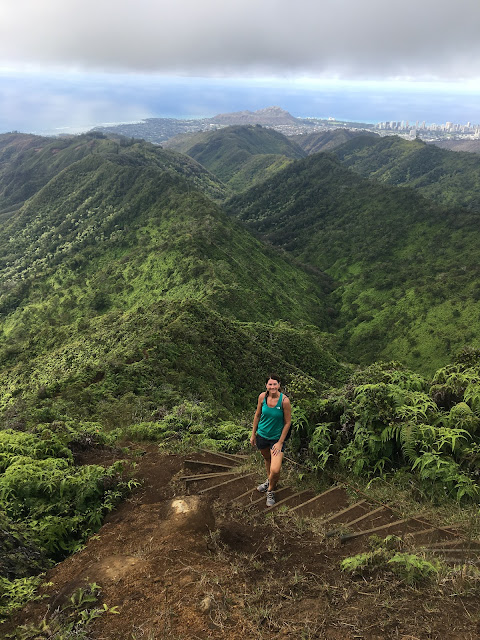 Other than my knee getting a little cranky, there was no trail first aid administered on this hike unlike when we did the Aiea Loop Trail. A few hamstring stretches were all I needed to finish. 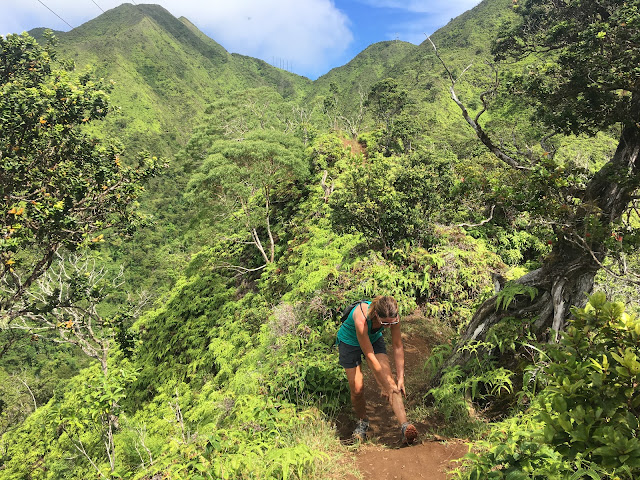