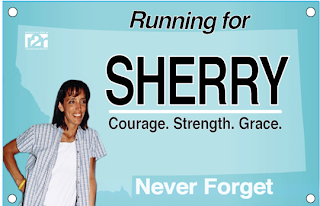 February 12 - Those of us in the running world have all heard the tragic story of what happened to fellow runner Sherry Arnold on January 7th. Yesterday runners from all over took part in a virtual run in her memory. It didn't matter where you were or how far you would go. It didn't have to be an organized event or even a group run. Only a simple request was made by her relative Beth from Shut Up and Run to take a moment of silence to think about Sherry, her family, and her community.

Sherry was a wife, mother, runner, teacher, daughter. All roles that I can relate to. As I laced up my running shoes and got ready to head out to meet my running partner, I couldn't stop thinking about Sherry and how much we're all like her in one way or another. It would be so easy to ignore her story. To not let the ugly in the world enter your thoughts. The truth is, Sherry's real story is that of the life she lived. She touched so many people and will be remembered for her Courage. Strength. Grace.

We ran 8 miles yesterday. The blue bib stood out on our clothing as we made our way to downtown Manchester. The sky was gray, the winds were brisk, and we were quieter than usual. Before hitting a mile, there was a honk. Then a few minutes later, another honk. These weren't the typical honk-to-harrass-the-runners honks. These were the sounds of people supporting our run because they saw we were Running for Sherry.
Posted by AmyC