It was finally time to continue hiking Wilson Trail in Hong Kong with my hard core hiking friends from Shenzhen. We finished stages 1 & 2 a few weeks ago (before everyone scattered on Lunar New Year vacations) and were ready to take on more of the long trail.

We began the 17.3km hike with a nice walk from the MTR to the trail head.  The views across the harbor let us put off the inevitable climbing for a few extra minutes. 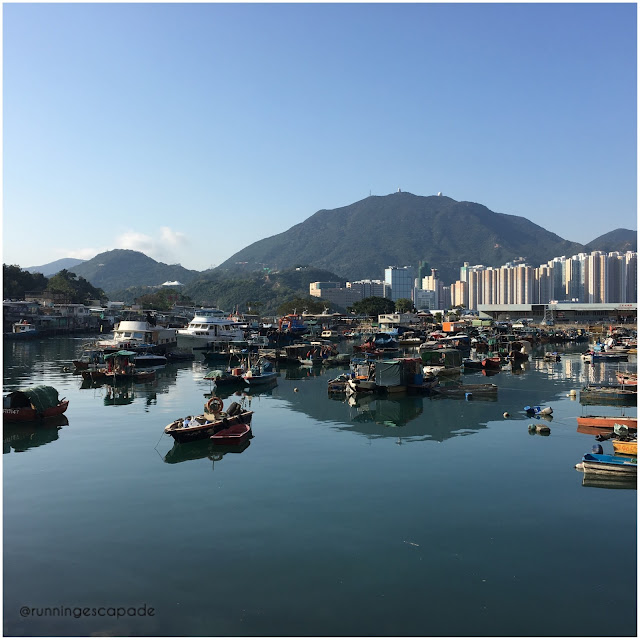 #17strong hard core hikers at the stage 3 start ---> these feet were about to take a beating! 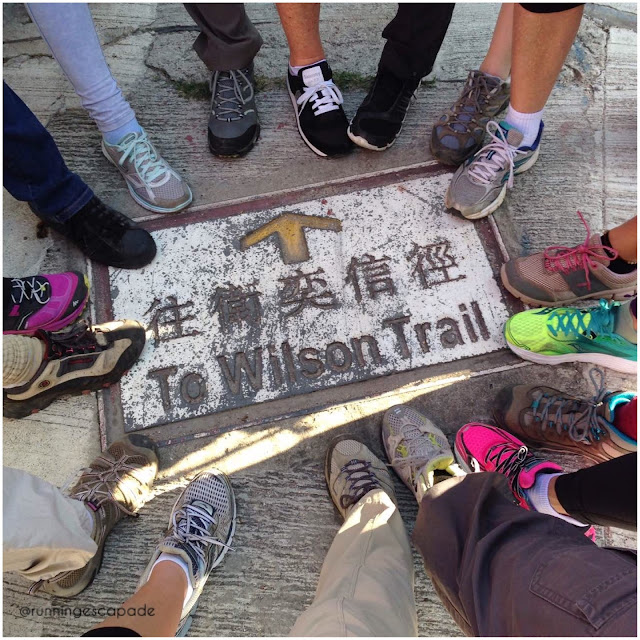 We found the steps at the start of stage 3 after walking through the alleyways of the seafood district along the water. 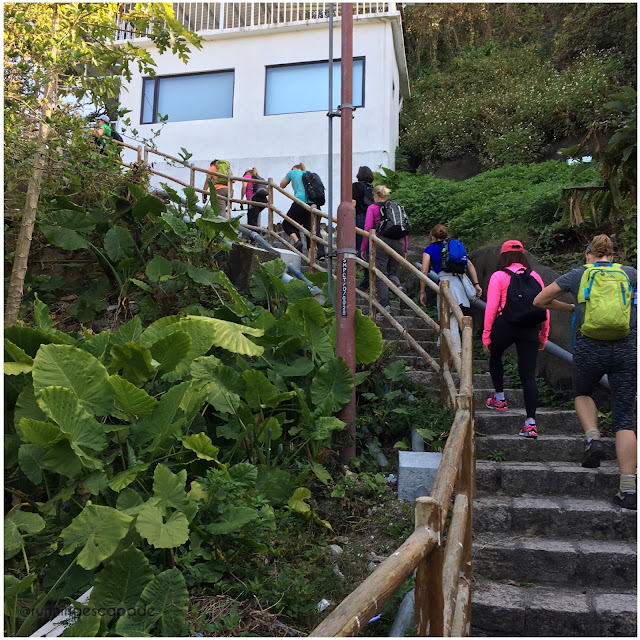 The trail led us to this huge Chinese Permanent Cemetery overlooking the bay. 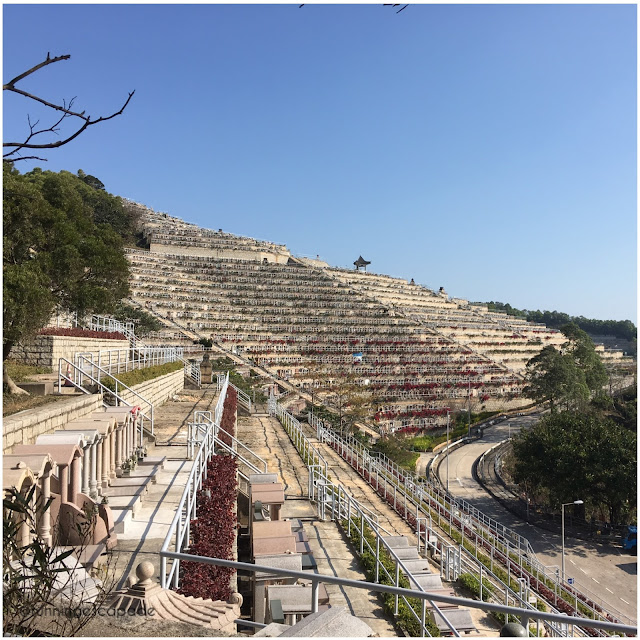 The climb continued up to Devil's Peak. Although we did not take the path all the way to the summit (222m) we still had great views. 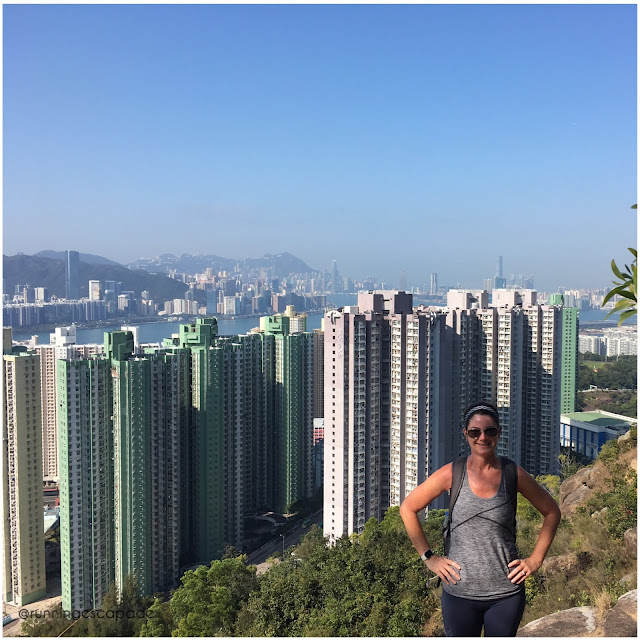 The trail then continued up to Black Hill (304m) where we had great views of Kowloon. 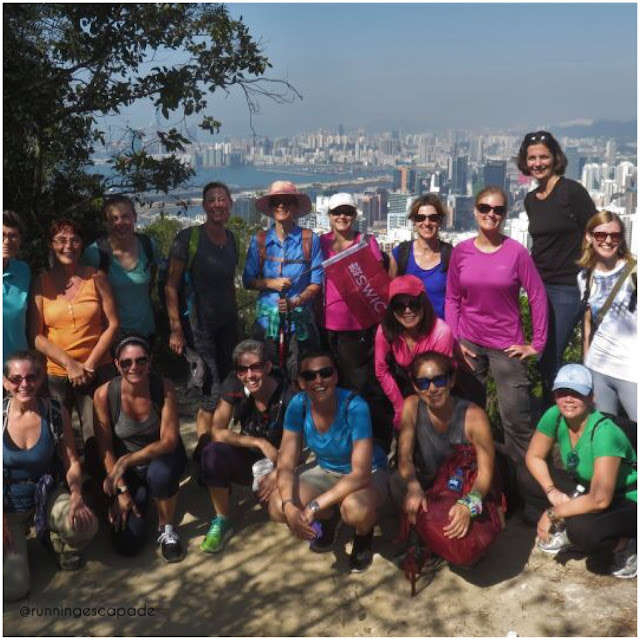 We weren't the only hard core hikers out that day. Here we are with another large group also hiking stage 3. 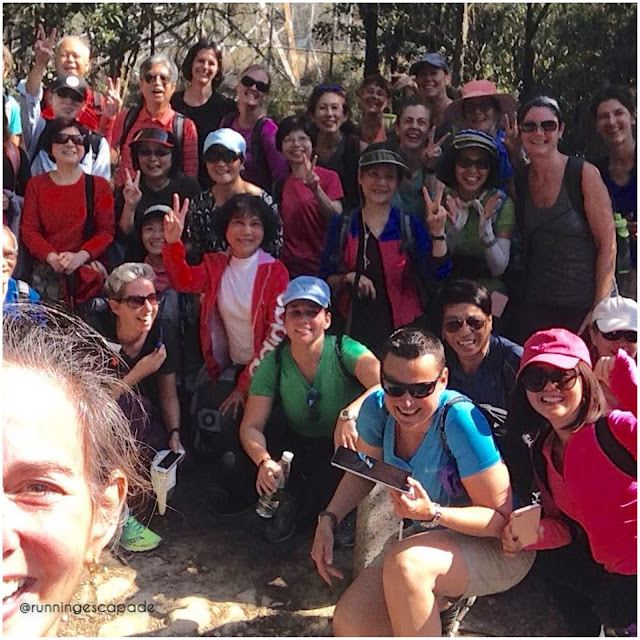 Near the end of stage 3 an interesting trail art gallery distracted us briefly from the fact that we still had 8km to hike and we hadn't eaten lunch yet! 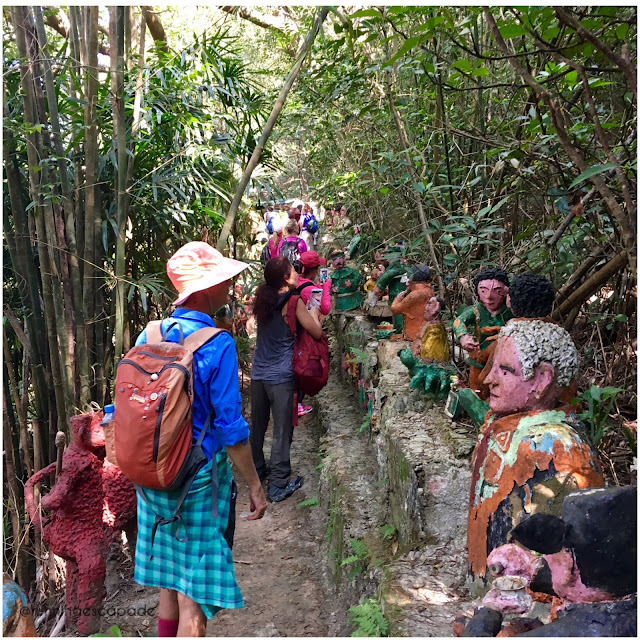 We had to walk through a village to stage 4 - this part of the trail was tough between the rocky, rooty terrain and the peaks of sun made it harder to see the ground. It was a welcome reprieve from the bright sun with plenty of shade. Along this part we also passed another large group of hard core hikers. 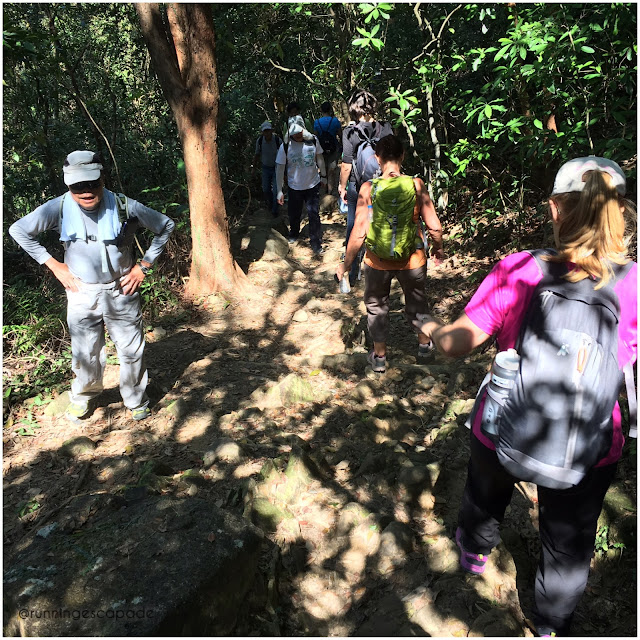 When we found a large shaded spot on the trail, we finally stopped for lunch. I really needed more than half a sandwich and grapes. It's hard to know how much to pack and my backpack doesn't make it easy. I'm on the hunt for a better pack ---> maybe this one, this one, or this one. Do you have a favorite? I'd love suggestions. 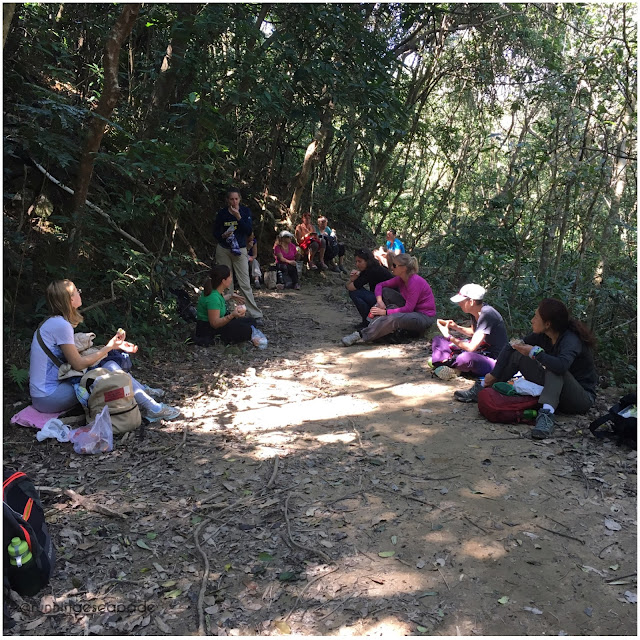 After passing through another much smaller village we began the climb to Tate's Cairn (Pass) and lost all cover of shade. We were lucky to be doing this hike in February when the temperature was only 65-70F, otherwise we would have definitely struggled a lot more. 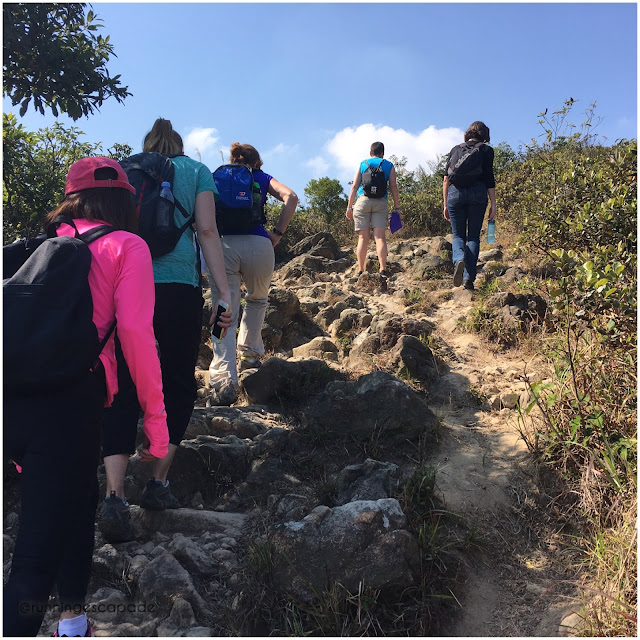 The open trail did provide amazing views though, especially of Sai Kung and Hebe Haven Harbour. 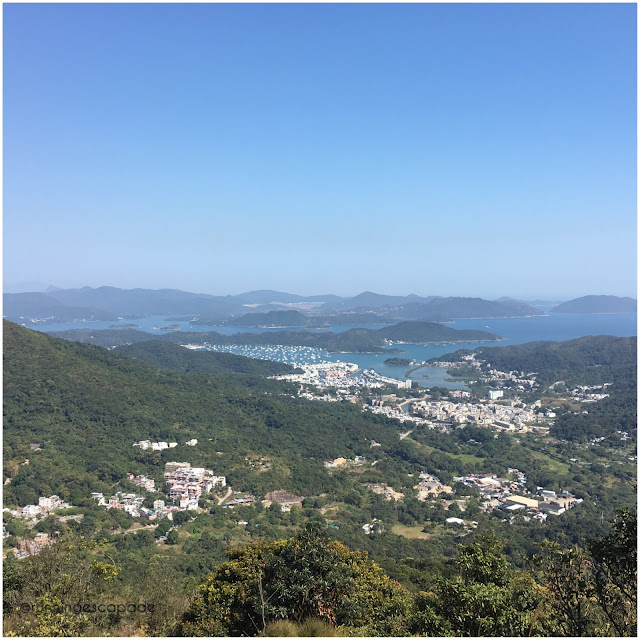 Although it is a common feng shui practice (graves facing water and high up to avoid evil spirits), it was still shocking to see horseshoe graves along the ascent knowing how hard it is to get to them. 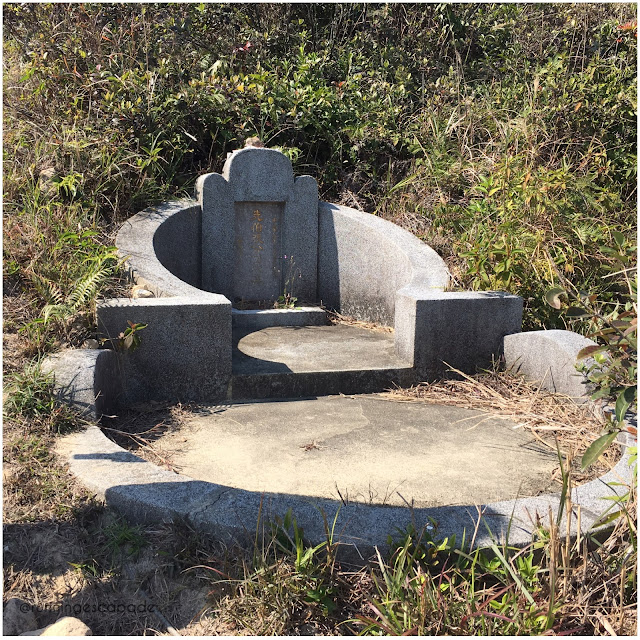 We eventually made it to our last peak of the day at Tate's Cairn/Pass (577m). The afternoon skies were not as clear as the morning, but the views were still pretty. 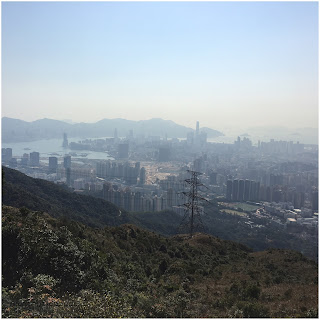 We followed the road to the end of the trail at Shatin Pass and were excited to get our first monkey sightings. They were scavenging in the trash and aggressive so after a quick photo we moved out of their space. 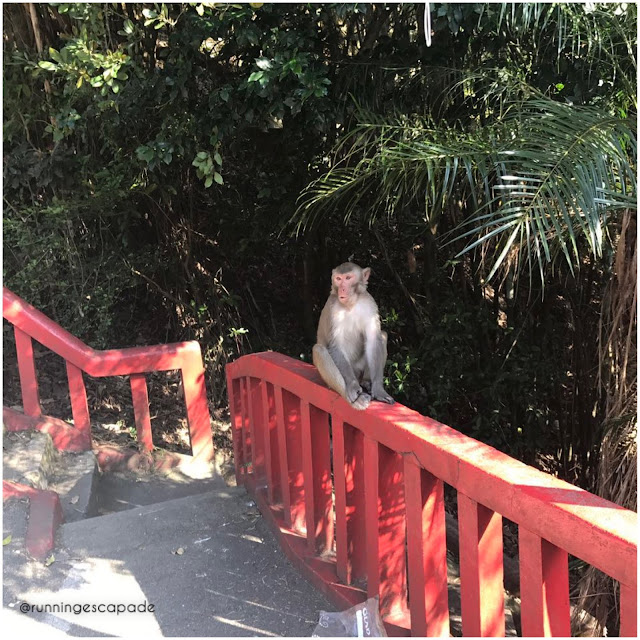 We found a little shop selling overpriced bottles of water there so many of us were able to resupply before walking DOWN the never-ending very steep road to the MTR. 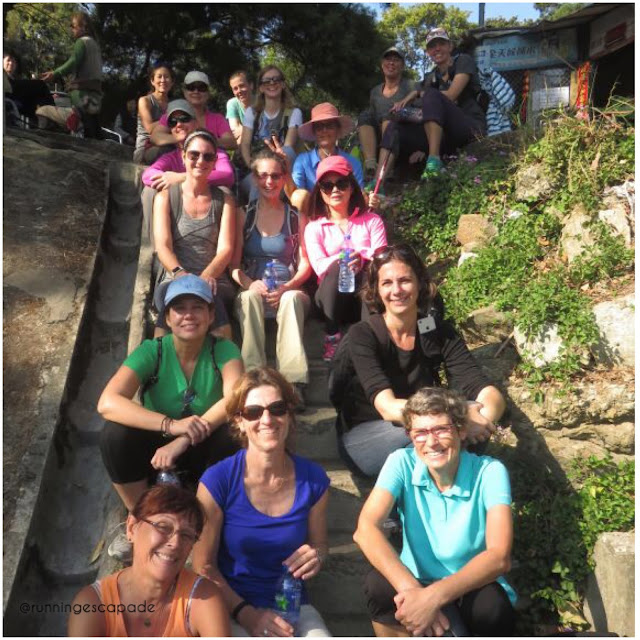 Sadly I will miss the hike on Wilson Trail stage 5 because we will be in the US for a couple of weeks, but I hope to hike it on my own asap!