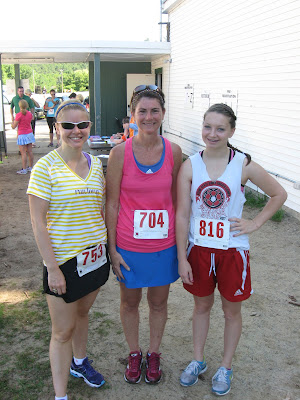 June 18 - On Saturday I ran the Kickoff to Summer 5K for the third time. This is a fundraiser race for the local elementary school in my town and dedicated in memory to local father Dave Cramb who passed away in 2008. This year I recruited my husband, step daughter, and BRF. My goal was to do as good or better than my 28:06 time from last year.

My BRF and I had a seven mile long run on our training schedule so we ran four miles before the race. We opted to run along the river, a simple out & back. It was a cool morning with bright blue skies and a pleasant breeze. Our pre-race run was a first for me. I've often seen and heard others talk about running before or after a race to get in the mileage, but I admit that I always thought they were kind of crazy. Now that I understand the importance of a proper training program, I get it. Afterwards, we met my step daughter and husband at the registration area before heading to the grand stand for the Opening Ceremony. 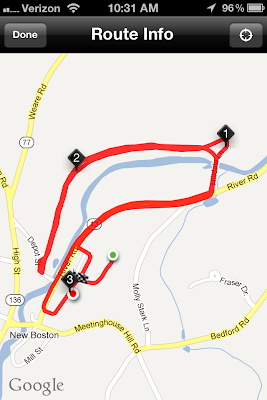 After a few brief words, a moment of silence, and the singing of the National Anthem all the runners and walkers headed to the start line. The combination paved and dirt road course starts at the Central School and loops through the local fair grounds. It's an easy, relatively flat course. The race started on time with a lap around the school and then headed out onto the main road for .75 mile before turning into the fair grounds. The next 1.5 miles followed a dirt road out and looped back around. Here there was a lot of congestion formed by the runners who had stopped to walk. The last .50 mile was a slight incline to the finish.

What I love about this race is that it is organized entirely by volunteers and they do an awesome job. They provide three water tables along the course staffed by students and parents from the school. It also includes a one mile fun run for kids and a kids' mad dash for the little ones prior to the start of the 5K run/walk. The only improvement would be to have chip timing. 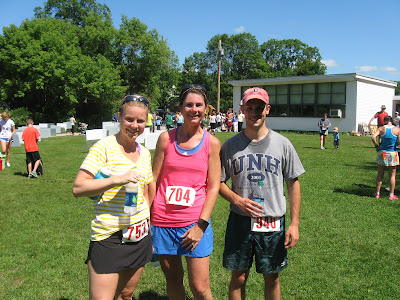 I'd been looking forward to this race because it was the first one I ran after moving to NH. That year was not my best running performance, but last year I did much better. This time I not only did better than the previous year, but also beat my six year old 5K PR with a time of 27:35 and 6th in my age group!

After finishing, I hung out with BRF while waiting for my step daughter (who was only a minute behind me) and husband to finish. We ran into a fellow teacher who was the third overall finisher this year! We cooled down over some delicious home made food and good conversation.

After the race, I was notified by Heather that I was being featured on her blog Running with Sass. Heather is a Mississippi girl who was inspired to run after watching her friends run the Disney World Marathon. Head over to her blog to see what she has accomplished since then!

How do you "kickoff" your summer?