Reach the Beach weekend finally arrived and thanks to my running partner I was invited to be a member of Team One Track Minded this year. This was definitely one of the craziest running adventures I have done yet.

Thursday: We drove to Lincoln, NH after work to stay with the team in a teammates' condo and get organized for the Friday start. Team members who arrived earlier in the day prepared a dinner feast of chicken and pasta for all of us to enjoy. Somehow we managed to find places for 12 people to sleep in a 3BR condo! 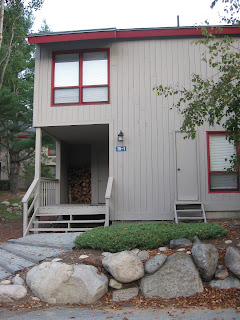 Friday: The whole team went to the start line at Cannon Mountain to send off Shana, runner #1 from Van #1, at 7:30am. It was nice to be there for the opening festivities and know that we would reach the beach early enough to enjoy the post race fun. 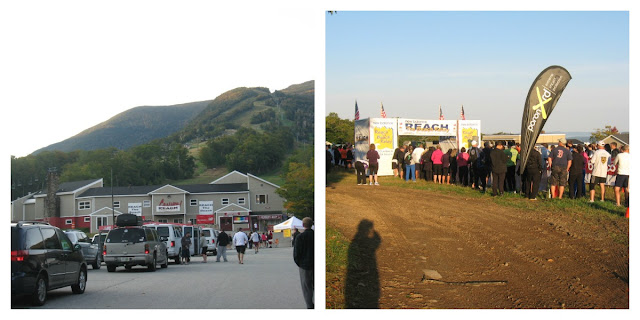 After some shopping for some RTB merchandise, we went back to the condo to decorate Van #2, eat breakfast, clean up, load up, and head out to the first Vehicle Transition Area where our legs would begin. 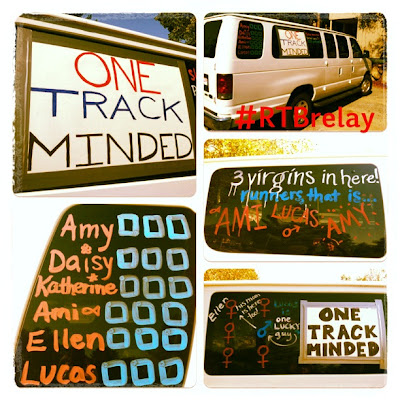 On the way we stopped to grab some lunch at White Mountain Bagel Co. 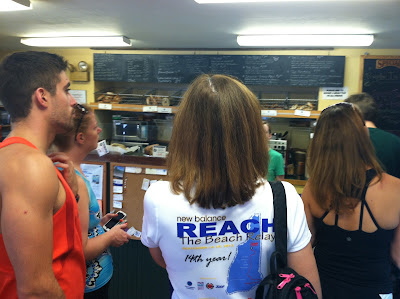 We arrived at Attitash Ski Area in Bartlett with plenty of time to spare and meet up with team members in Van #1. This was my first chance to see the transition areas in action. Despite the fact that there are hundreds of vans and runners, the process is pretty smooth and simple. Runners enter the transition chute and hand off the relay bracelet to the runners waiting while non-running team members stand off to the side and cheer. 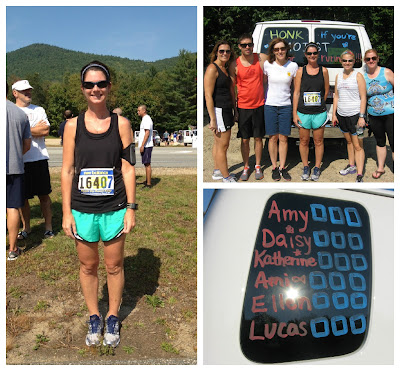 My first leg started around 1pm when runner #6, Joe, came into the chute and handed me the relay bracelet all curled up (so cute). It was seriously HOT and I guess I was excited because I went out on this 7.31 leg fast and ended up struggling the last couple of miles. I was lucky enough to be able to cool off at Echo Lake in North Conway afterward. It was gorgeous and felt amazing. 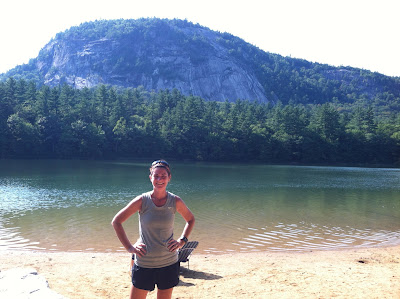 My running partner cooled off after her run in the piles of snow left by the zambonies at the HAM Ice Arena in Conway. 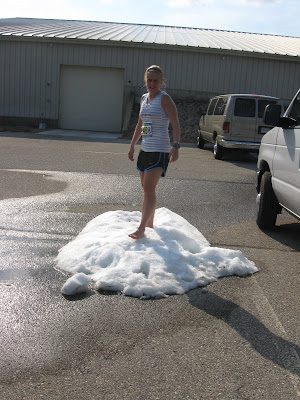 After all our runners completed their first leg (and Van #1 finally arrived, ugh), we had dinner at Kenneth Brett School (one of many fundraisers held at the transition areas along the relay) in Tamworth and then headed to the home of one teammate's in-laws' in Laconia to get some rest before our night legs began. Luckily her in-laws lived about 15 minutes from the start of the next legs. 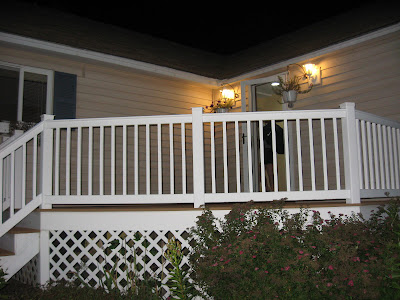 Saturday: After about 3.5 hours of sleep, we were up and ready for the next leg of night running. I started us off with my 4.5 mile leg at 1am from the NH Technical College in Laconia. Before this run, I had only run once at night and never in the middle of the night, but I was surprisingly calm. It was incredibly muggy and humid, and I was thankful that I changed into shorts from capris at the last minute. This time I stayed with a couple of other runners for about two miles and used my playlist from Rock My Run to pace myself after passing them. This run went much better than the first. The only scary moment was when one of my flashing lights came off, but the girl running behind me spotted it upside down in the grass. 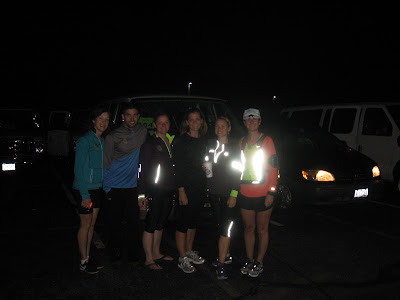 Somehow we survived all six legs without losing anyone despite going to the wrong transition area, driving right past one runner, and having two runners with stomach issues during their runs. As horrible as all this sounds, running at night was not bad at all! We drove straight to the next vehicle transition area at Sanborn Regional High School so that everyone could get some more rest before starting the last leg. I fell asleep in the van on the way there and took another nap in the back seat while others headed outside to sleep. Thankfully I put on my Zensah compression socks right after my run. 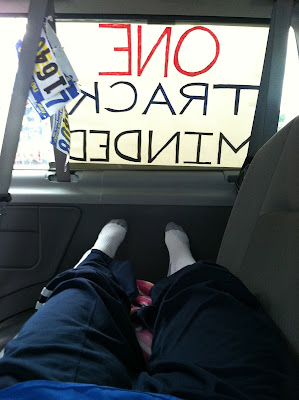 Rain had passed through earlier in the morning, but by our start time the skies had turned sunny and blue. I started off the final legs for Van #2 around noon with a short 2.4 miles to Kingston. It was warm and I went out faster than I planned, but was able to pull it off this time without burning out because it was short. 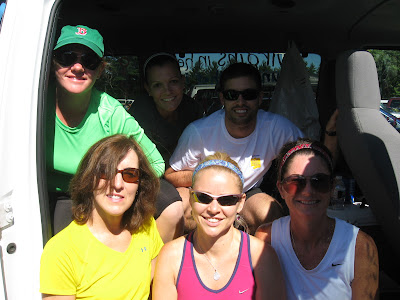 The final legs went by so quickly. Before I knew it we had left our last runner and were driving to the finish line at Hampton Beach! Oh yea, anticlimactic moment...Van #2 didn't get to run across the finish line with the team because we were stuck in traffic. So the scorecard will have to suffice. 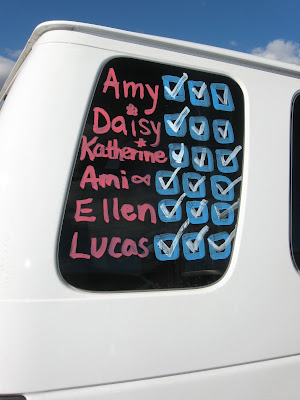 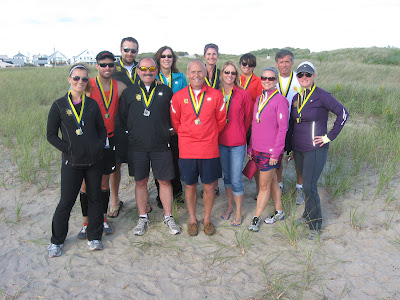 RTB was an incredible experience. My teammates in Van #2 were so supportive, hilariously funny, and running-junkies like myself. I am extremely grateful to have had the opportunity to run with these amazing people.

So today I am off to my next running adventure: the ZOOMA Cape Cod Half Marathon. I am really looking forward to all the amazing events and hanging out on the beach. I'll be back with a recap soon, but you can follow the #ZOOMA fun on Twitter. 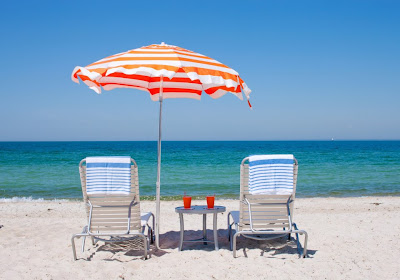 Have you entered my Mizuno Giveaway? Today is the last day to enter. I'll post the winners on Monday. Good luck!

Have you ever done a relay? What did you think?
I'm ready to do it again ;)