Getting into races in China is not easy. It took me six months to find a race, register (in English) for the lottery, and be accepted (after first being denied). The whole process was as foreign to me as I am to China!

Let me start from the beginning...

Registration:
Registration for the Shenzhen International Marathon opened only 5 weeks before the actual race date and was a lottery. For three days, runners had a chance to sign up for the marathon, half marathon or 6K. For runners doing one of the big races, I guess you just train and cross your fingers!

I found out about the race from a friend who saw it in the newspaper and emailed me the link. I was in the US with mrC at the time, so after working out the time difference, I hovered over my keyboard until the clock ticked 9PM and the website opened for registration. It took about three tries to enter all of my information for the 6K and submit it successfully. I was caught off guard with questions asking my blood type, my passport number, and PayPal account to pay (no credit cards! what??).

A week later the lottery results were issued. When I checked my account, it said that I "lost the lot." I was bummed. A couple of weeks later I went back to the website to check on my refund and discovered that I had "won the lot!"

Packet Pick-up:
I found out about packet pick-up the day before the race when I was researching how to get there.

mrC and I took the 40 minute metro ride to Civic Center Square to pick-up my race materials. The pick-up area looked like any typical race: a large tent with numerous windows for each event manned by volunteers. We approached one of the 6K windows and were greeted by young smiling Chinese volunteers who spoke no English, but indicated that I needed a form, which I did not have. After a few minutes, a volunteer who spoke some English was located, and he pointed me in the right direction to get my form, at a different window.

After showing my passport and a screen shot of my "won the lot" registration page, I was given my Race Articles Collection Sheet and sent back to the 6K windows to pick-up my bib and other race goodies. What I did NOT get was a disposable timing chip; only marathon and half marathon runners would be officially timed.

Although the Civic Center Square is a huge place, we did not see any indication of an expo. 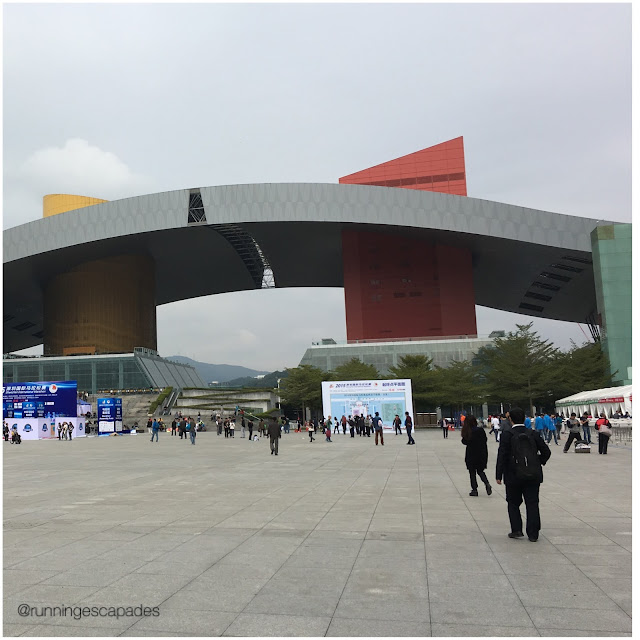 Race Day:
We arrived at the race about 40 minutes before the start to discover that the Civic Center Square was for runners only. mrC wished me luck and sent me through the security check point to find my way to the start line on my own.

Once I was inside the runner's area, I took a moment to look around and then followed the mob going in the direction of the starting corrals. I knew the corrals were lined up by event: marathon, half marathon, 6K. What I didn't know was how hard it would be to walk to that last corral! 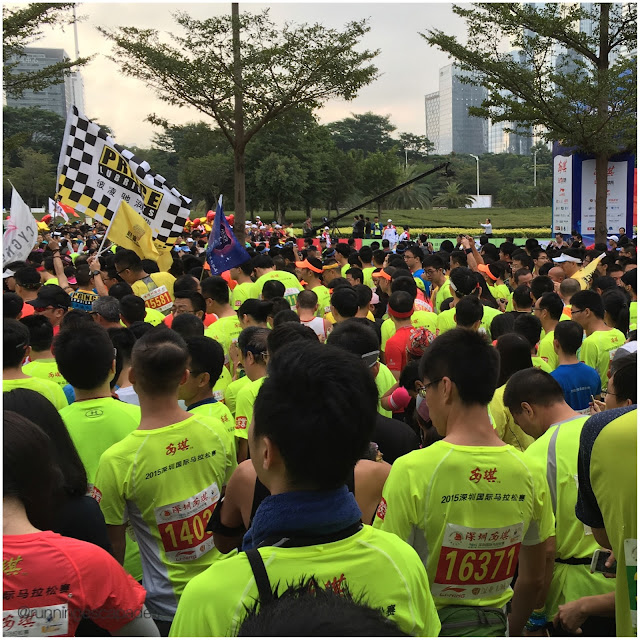 While waiting in the corral, runners all around me were waving and yelling at helicopters that flew over, holding up their flags and balloons, and taking lots and lots of pictures. A friendly Chinese girl took a photo for me and then we started moving. Ten minutes to get to the starting line.

The first half mile of the race was in slow motion. There were SO MANY people and almost impossible to RUN. Finally the crowd started to spread out, but I still came upon large groups running together blocking the whole course, runners stopping to take photos of EVERYTHING including other runners, and walkers. 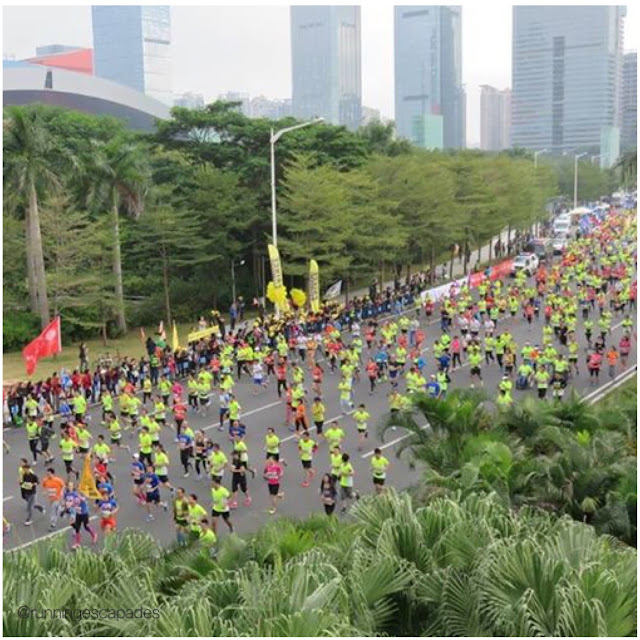 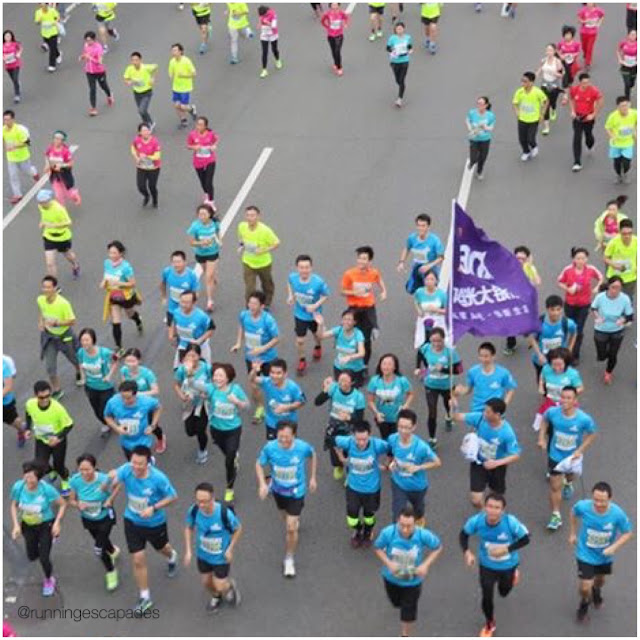 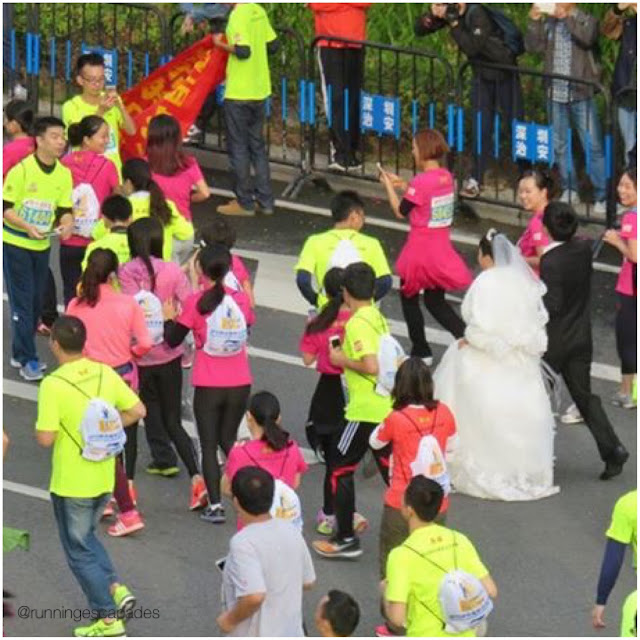 After crossing the finish line, we were herded off to the side of the runner's area to claim our bag of finishers goodies including a medal.

There was a lot of post race activity inside the runners only area including a place to get stretched out and what looked like sponsor booths. Some Chinese drummers were performing on a stage. I didn't hang around since mrC was stuck waiting outside for me. 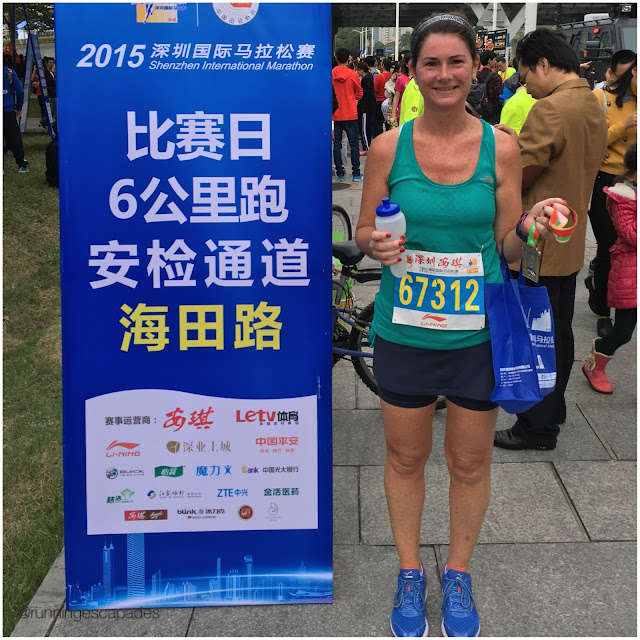 Overall:
There were 25,000 total runners, and 9,000 ran the 6K. I've run in bigger events, but always with pace corrals which really do make a difference (even if people pace themselves incorrectly). I've seen runners dress up in crazy outfits, but this was the first time I've seen the big flags and balloons carried like a parade. It was crazy, but it was fun.


Video of the race: