January 12 - Today I got the heavily anticipated email stating Due to the weather, all schools...will be closed today. It was snow day number three. No school for me. No flights for hubs. Just a good 'ole fashion mini-snow storm in New England. I was still up early (after telling the kids to sleep in - go figure), so with the downstairs to myself for a couple of hours I did my first day of the #100Ups Challenge that I read about on INSPIRUNNING's blog along with my usual NTC workout. Then I relaxed with my coffee, the computer, and the news while waiting for hubs to wake up. 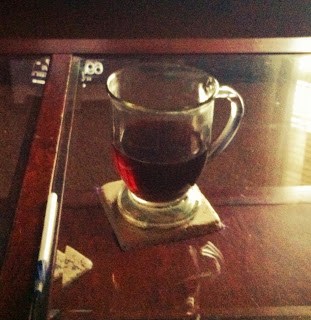 Fast forward. After lunch, I FINALLY coaxed hubs into going on a snow run with me. It was still snowing a little but it felt pretty good out. Hubs offered a pair of snow & ice cleats which I happily accepted to try out for the first time. Made of rubber each cleat slips on over the running shoe and has six spikes positioned to help with traction. I've never used them before so I was excited to test them out. 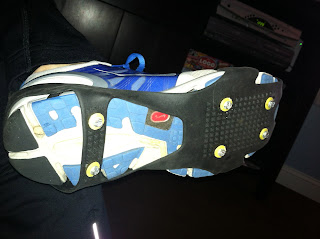 We made our way easily enough down the plow-guy deprived driveway through about six inches of snow. Our short out and back run of three miles would take us on the main road briefly before turning off onto a side back road, and then on to a dirt road that led to a pond. 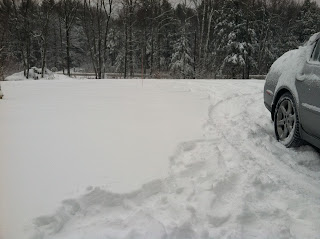 The roads were semi-plowed so it had that chunky feel. Where the plows had passed, the cleats worked really well. No slipping at all. Feet felt firm almost like they were on pavement. Where the roads were still snow covered I felt as if I were running in sand. It was just hard. The snow was the powdery slippery kind and it made my legs really have to work. I never felt like I was going to fall or slip though. 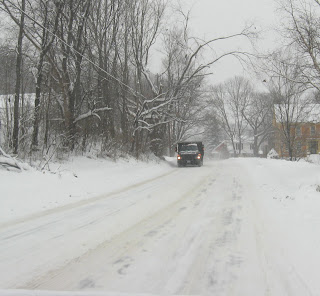 Our snow day run was a lot of fun. We had to jump in the snow banks as cars passed, wait for the snow plow to push by a couple of times, and almost help a car that was stuck pulling out of a driveway, but definitely worth going out and avoiding the treadmill. I love the white wonderland that is created after a fresh snow. 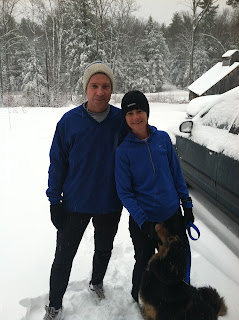 My next run is another training run for the half marathons coming up. Running in the snow today was a great workout in my training. It wasn't speedy or lengthy, but it was challenging. And, you never know about the weather in New England. You have to be prepared for anything!


Do you run in the snow/bad weather or head to the treadmill?

What was your weather like today?
Posted by AmyC