January 30 - Unexpectedly, I found myself packing for a quick weekend trip to Orlando. Now I know the weather in New England has been pretty mild this winter, but who wouldn't be excited about visiting the sunshine state?

I took a quick peak at the forecast for Saturday morning before packing my running bag: 51 degrees. My scheduled run on Saturday would give me a chance to see how I felt running in temperatures that are pretty average for May in Providence, which is where I will be running my second half marathon of the year at the Cox Rhode Races. 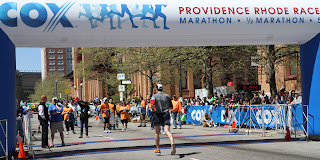 Saturday morning after a quick breakfast of PB&J toast at the hotel, hubs and I headed toward the Airport Lakes Park that the concierge recommended. It was a picture perfect day to run. Sun, sun and more sun. 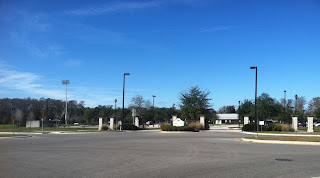 The run to the park was much shorter than we expected and it was smaller than we hoped, so we decided to follow the sidewalks. We ended up looping around the hotel before trying inside the park. Duh. There we found a nice, though short, running trail. At one point it led out to a small lake. 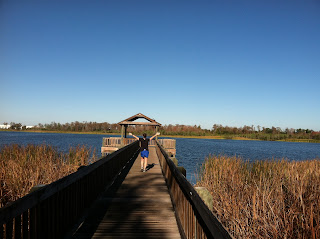 Since we didn't really know the area (and hubs was only running 4 with me) we decided that to be safe I should stick to the immediate area around the hotel. This was a combination of several other hotels as well as shops and restaurants. After 7 miles, I was done running what felt like circles. 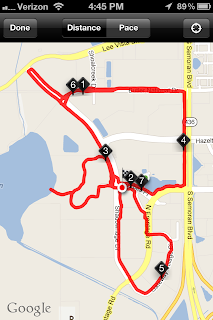 Admittedly, the warm weather did affect me. I was wearing a short sleeve running shirt, but could have easily worn a tank. When I get excited I also tend to run too fast, just like on race days. All things to remember for my half marathon in May. The best part was running on beautiful sidewalks and having water delivered. He's training for my halfathon, too!

After the run, we headed to the hotel pool. At 70 degrees, it wasn't warm enough for me to get in, but I did take a dip in the hot tub. You have to spoil yourself when you can, right? 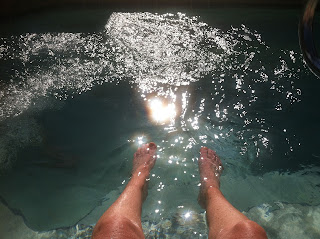 Do you pack your running shoes on trips/vacations?

How do you spoil yourself after a run?
Posted by AmyC