March 19 - Yesterday I ran half marathon #3 in Quincy, Massachusetts. This race wasn't on my schedule until last weekend. My Crazy Running Partner has a goal to do 12 half marathons this year. She told me she was running this one and since hubs is out of town, I thought I'd join her to be her cheering section or maybe do the 5K that they added this year. But when I went to the website to register, I found myself thinking...Why shouldn't I run the half? A 5K seems kind of short these days. I'm in the best running shape I've ever ben in. I still have plenty of time to recover before the next one on my schedule. So that's how I ended up running half #3. 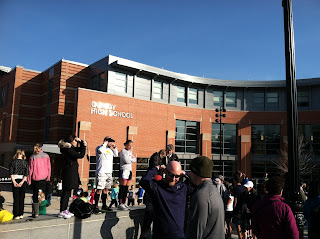 The race was 90 minutes away from where we live, so it was an early morning. On the way to meet CRP I picked up my stepdaughter who was coming along so that she could catch the train in Boston back to school after the race. She also promised to be the "second best cheerleader" after her dad. So off we went to Quincy High School - the most beautiful high school I have ever seen! I have been teaching for a long time including in a brand new building in Ohio, but this was like visiting a college campus or fancy hospital. Gorgeous. 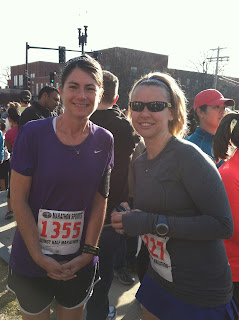 The weather was forecasted to be 45 degrees at the start but climb to over 55 about the time we expected to finish. We opted to dress for the warmth accepting that we would freeze a little waiting at the start. Small sacrifice. I think it was almost 70 when we crossed the finish line. Pre-race was super organized. The website said "convenient parking behind the school" and except for lack of signage, it was perfect parking for a pretty big race. Bib pick up in the gym was quick and easy and if you were one of the first 500 to register you also got a race shirt. That, of course, was not me. The only restroom we saw had a line (shocker) but it moved quickly and we had plenty of time to head back to the car before making our way to the starting line. A Quincy police officer sang the National Anthem and we were off. 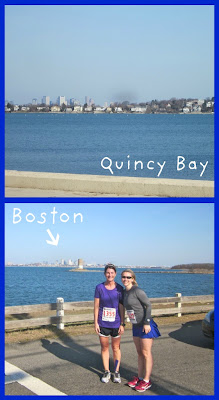 The plan for this race was to treat it like a really big fun group run. We weren't going after PR's and had in fact practiced slowing down our pace on a couple of runs during the week. We brought our cameras so that we could stop and take pictures.

It was a beautiful course to run. At 1.5 miles we stopped to take some pictures of the incredible views of the Boston skyline across the Quincy Bay. We were lucky enough to have the assistance of a couple of Quincy police officers to snap one with us in it. After that we ran along Wollaston Beach, a two mile stretch of shoreline anchored by a continuous walkway and fine sand. We found more incredible views as we traversed four miles onto the Squantum Peninsula and through the Marina Bay Complex. Although the docks were mostly empty this time of year, the luxury residences that lined the boardwalk were beautiful and had me longing to win the lottery. The remainder of course led us back through the "forgiving" hills of the historic "City of Presidents" and to the finish lined with cheering crowds including the "second best cheerleader" who gave me a high-five as I passed by.


At the finish line we were handed our Half of Quincy medals and a bottle of water. Two thumbs up to the race organizers for having the water right there and not making runners walk around searching for it. Also readily available outside were bananas, while inside runners could choose a turkey, tuna, or chicken wrap, along with warm soup. We already made plans to hang around Quincy for lunch so we declined the food but snagged some Vita Coco Coconut Waters. After a quick wardrobe change at the car we set out on foot to grab some lunch. 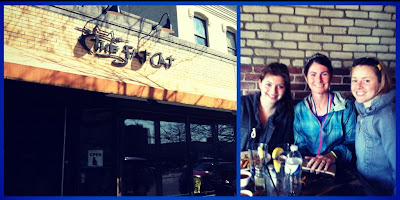 Three iPhone apps, a couple of blocks, and one closed restaurant later, we found ourselves at The Fat Cat and I believe we lucked out. This warm and easygoing establishment had a variety of appealing choices on the menu, was very affordable, and treated us to great customer service. CRP informed us that the restaurant had been featured on Phantom Gourmet and it was easy to see why. The food was delicious.

Have you ever run a race unexpectedly? How was it?

Email ThisBlogThis!Share to TwitterShare to FacebookShare to Pinterest
Labels: half marathon, Massachusetts