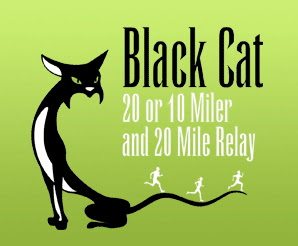 March 5 - Sunday morning I left my house at 5:30 to meet Daisy for a ride to The Black Cat 10 - 20 Miler in Salem, MA. This race offered runners the option of running 10 miles, 20 miles or participating in a 20 mile relay. The course, touted as mostly fast & flat, started at Salem Willows, wound through downtown Salem into Marblehead and turned-around at Devereux Beach. The race was created in 2010 to attract runners training for the Boston Marathon and others ready to lace up their sneakers from the winter. For me, it was a great distance for maintaining my endurance for my next half marathon. 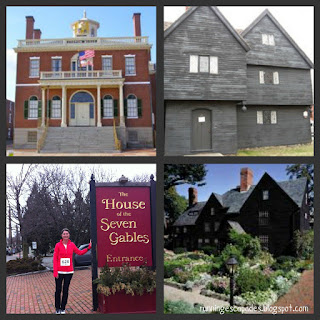 Salem is a town most widely known for the witch trials of 1692. You may have read about them in The Crucible by Arthur Miller when you were in high school. It is also the birthplace of Nathaniel Hawthorne, another famous New England novelist you may have read who wrote The Scarlet Letter and The House of Seven Gables. 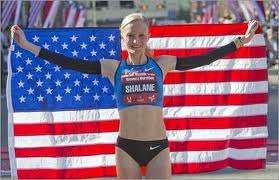 The race route connected the town of Salem to Marblehead. What many people may not know about Marblehead, a small historic coastal town, is that it is the hometown to one of our very favorite runners, Shalane Flanagan. You may recognize her as the 2012 Olympic Trials Marathon winner. She will be representing the United States at the 2012 Olympics in London. It was pretty cool to run past the "Welcome to Marblehead, Hometown to Shalane Flanagan" sign. I wish I'd taken a picture...

The 10 mile race was challenging. The course was much hillier than I anticipated, but because Salem State is nearby many sororities and fraternities set up water and Gatorade stations as part of their community service projects. There were times when the runners and traffic were crowded together on the road, but in other places the local police and volunteers were present to give direction. At the finish line runners were handed finishers medals and directed to water, Gatorade, post race snacks, as well as stretching and massages in the school gym. This was a fun race and I would do it again.

This new and locally organized event was a success. The 10 Miler had 664 finishers, the 20 Miler had 327 finishers, and the Relay had 18 teams finish. And although we didn't attend, there was a post race party at FINZ Seafood & Waterfront Restaurant where for $10 runners were treated to a variety of post race food, cash bar, free samples of Barefoot Wines, raffles and entertainment.

This race also supported a worthy cause called the Allie Castner Scholarship Fund. Allie was hit by a car and killed in 2009 when she was only 15 years old. The scholarship in her memory provides other young high school students the opportunity to benefit. Take a moment to read her story and the many ways you can contribute to the fund.