March 12 - Yesterday I ran my first five mile race at the St. Paddy's 5 Miler in Portsmouth, NH. I was lucky enough to have hubs running with me, but even better was that my home-from-college-on-spring-break stepdaughter came to cheer us on. I signed up for this race to use it as another run to maintain my current endurance and stay prepared for my upcoming half marathon. 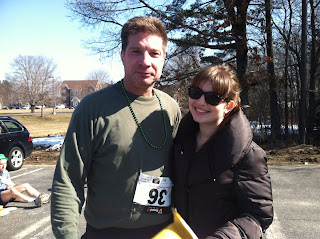 To get into the spirit of the race, we sported the only green shirts we could find. Clearly hubs and I are not very festive when it comes to clothes. Needless to say, we did not win the best spirit awards for the day. 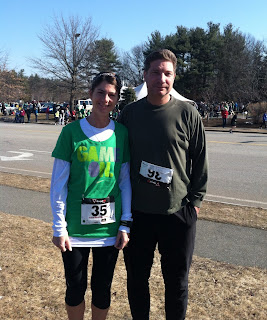 We arrived with plenty of time to pick up our bibs, grab our race t-shirts and use the restrooms. Even though it was a bright sunny morning, the temps were still pretty chilly and the wind was downright cold. We opted to wait in the car before heading over to the start where we were surrounded by people dressed in all kinds of crazy green costumes, bagpipe players, and cheering spectators.


The race started with the typical cluster-chaos of mixed up running paces. Since I run these things for fun I don't try to get to the front, but it does get somewhat frustrating when you are a half mile in and you are dodging people who are walking. I stayed with hubs for about a half mile, but then moved off on my own.


About two miles in I came up behind a group of women who were running a nice comfortable pace and decided to stalk trail them. They became my unofficial pacers for the day. For the next three miles I ran behind this group as they chatted about people they knew, trips they were taking, and long runs they had on schedule. The next thing I knew we were approaching the finish. At the corner I saw my stepdaughter waving which gave me a big burst of energy and I ended up passing my unofficial pacers.


After crossing the finish line, I was handed a cute green beaded necklace and a beer ticket. I quickly made my way to the post race fuel tent, grabbed two waters and then made my way over to my stepdaughter to watch for hubs.


After grabbing some of the amazing post race refueling food (hot vegetable soup, subs, and chips) from the tent, we walked over to the beer garden at Paddy's American Grille to grab our post run beers and official Paddy's Five Miler race glasses. 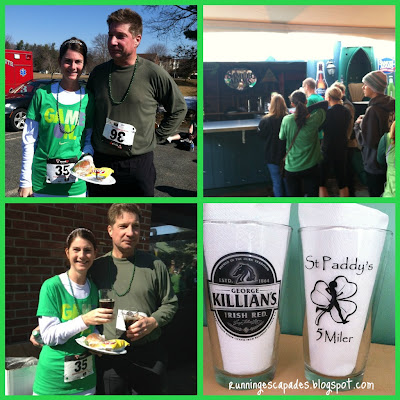 We had a blast at this event. What made it even better was knowing that all proceeds from the race go to New Heights, a non-profit organization that promotes healthy lifestyles and activities through after school and summer programs for Seacoast youths age 11-18.