I'm super excited to write a race recap about my first race in a new country! 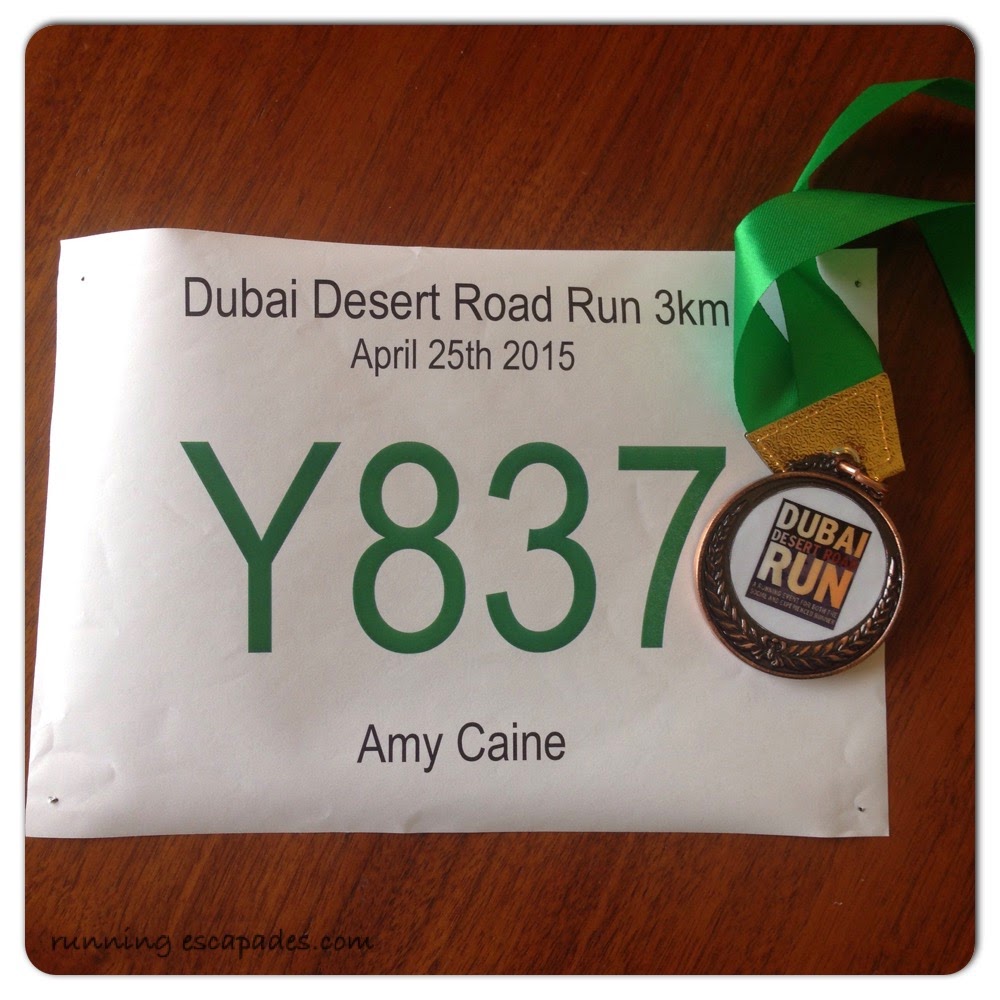 As a runner, running races in different states has always been appealing. When I discovered that the Dubai Desert Road Run 3K and 10K event was being held during my visit, I couldn't wait to sign up and add another country to my list. Since running in the heat hasn't been my friend, I signed up for the 3K. I figured running a 2 mile race in another country was better than not running at all! It was really about the bragging rights anyway :)

The race was held at The Sevens Stadium about 30 minutes from our hotel. The Sevens is a multi-purpose sports complex with fields used for rugby, soccer, football, tennis, track & field and concerts. As you can see in the picture below, the venue is literally surrounded by desert. Appropriately, there is even a camel racing club next to it.


We took a taxi to the race and had plenty of time to pick up my bib, look around, and get ready for the race. Even though the venue was kind of fancy pants with changing rooms and showers available, the race itself was pretty simple. I like simple. 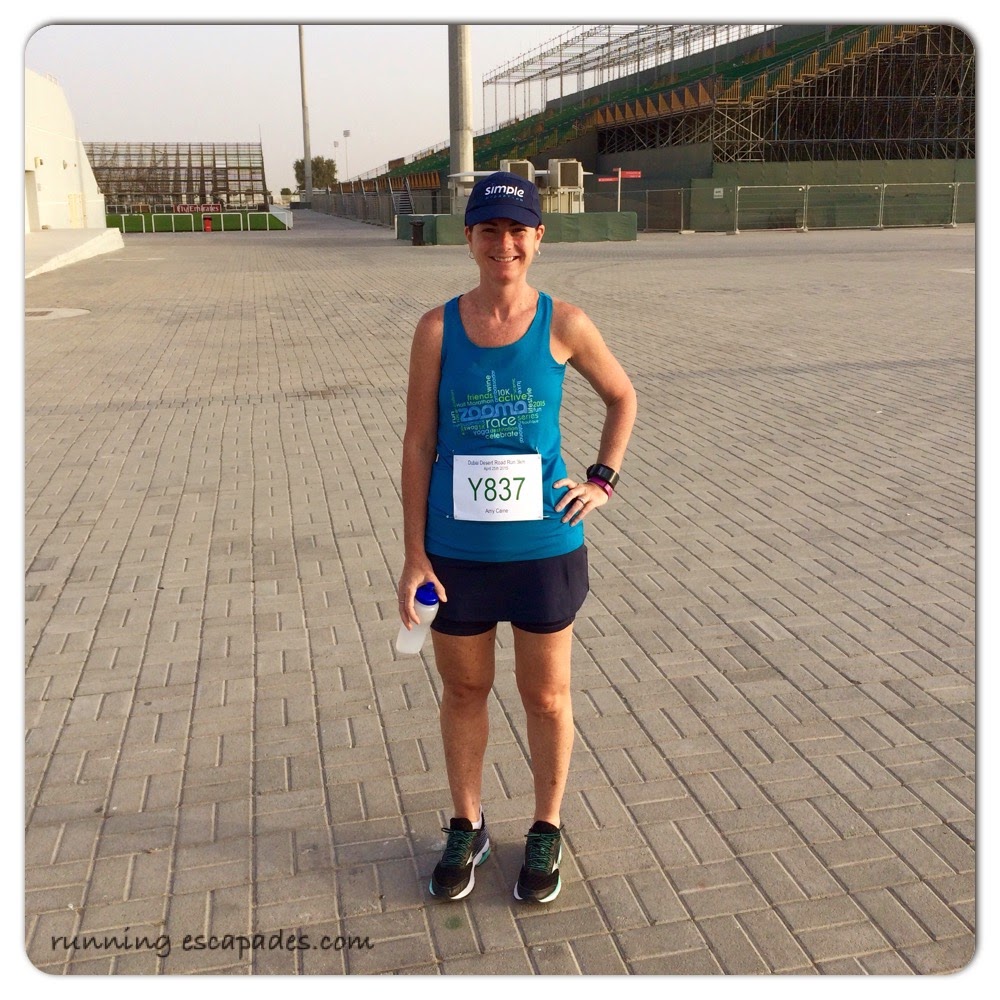 The 10K runners started promptly at 7AM followed immediately by the 3K at 7:05AM. The course for both races began behind the grandstand and led runners out of the stadium complex onto traffic free back roads. 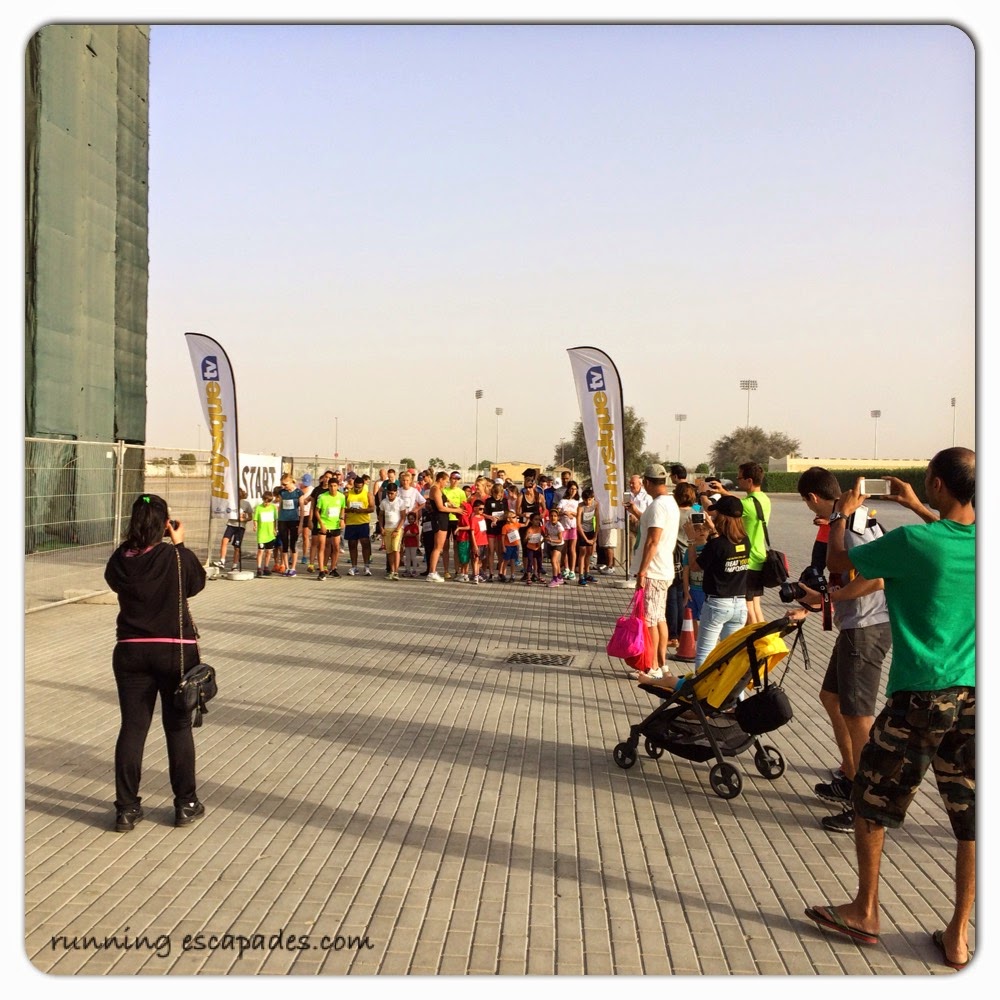 The race was quiet. Most of the spectators stayed near the grandstand where they had music at the start/finish area, so the only people out on the course were runners, photographers, and aid station volunteers. Running toward the 3K turn-around, all I saw was flat brown sand and groups of camels.


Even at 7 o'clock in the morning it was warm. As I ran toward the finish, I was glad that I chose the 3K. 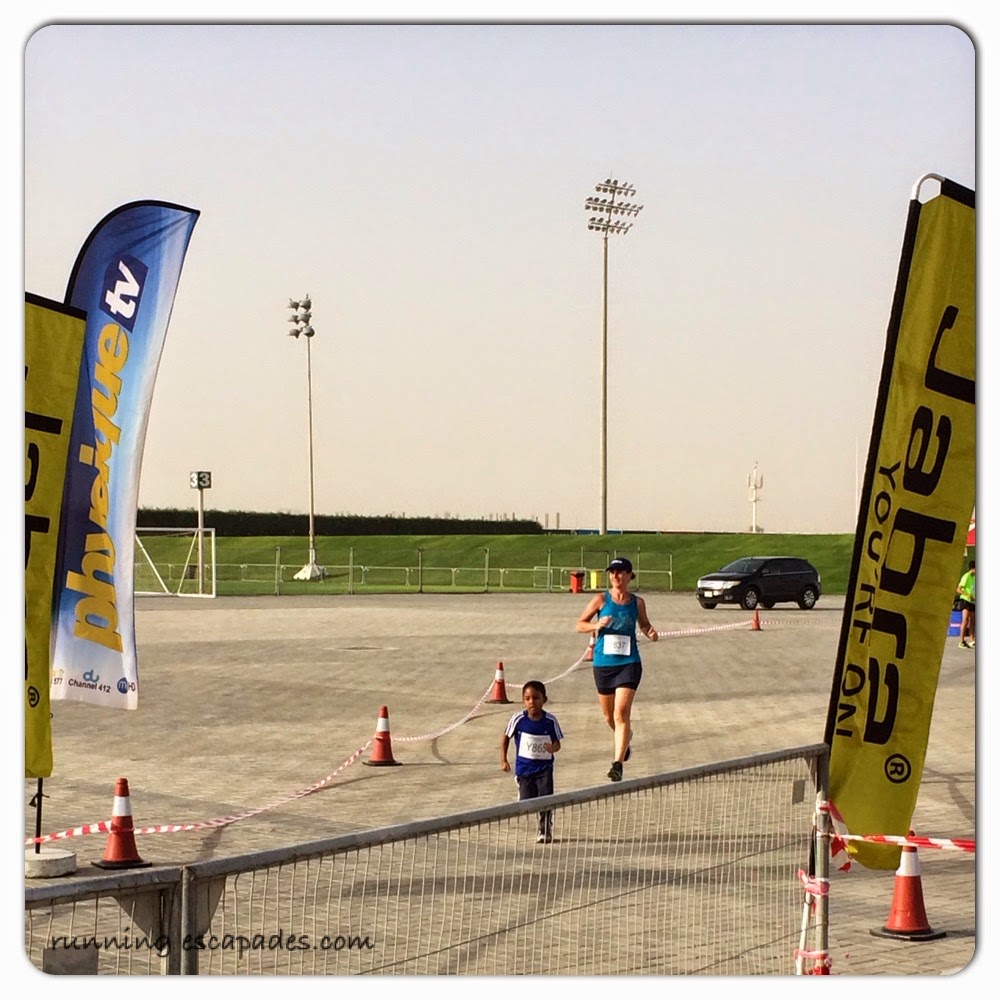 My results were much better than I expected. The 3K race was not chipped timed, but instead numbers were manually recorded at the finish line. 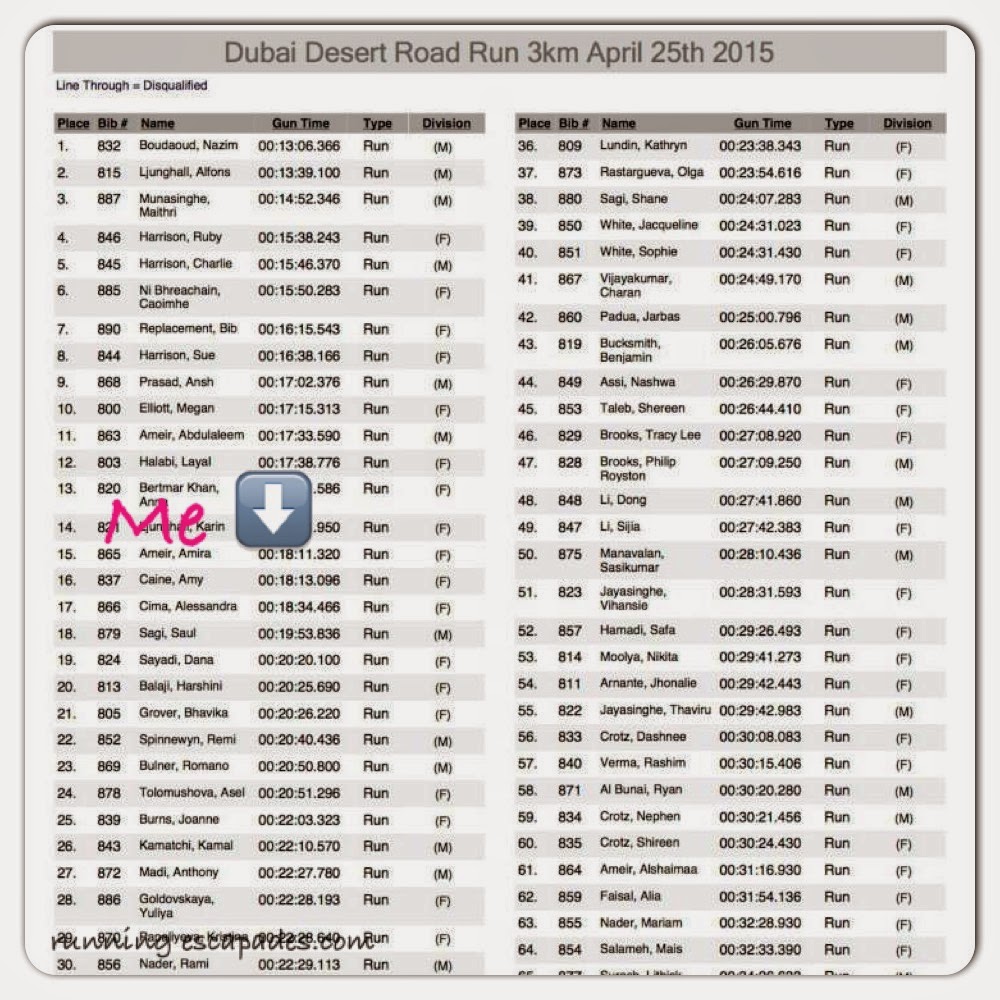 It was a blessing that mrC's class schedule opened up and he could go to the race with me. He is still on the no-running list following his gallbladder surgery, but we're both anxious for him to get back in his running shoes. 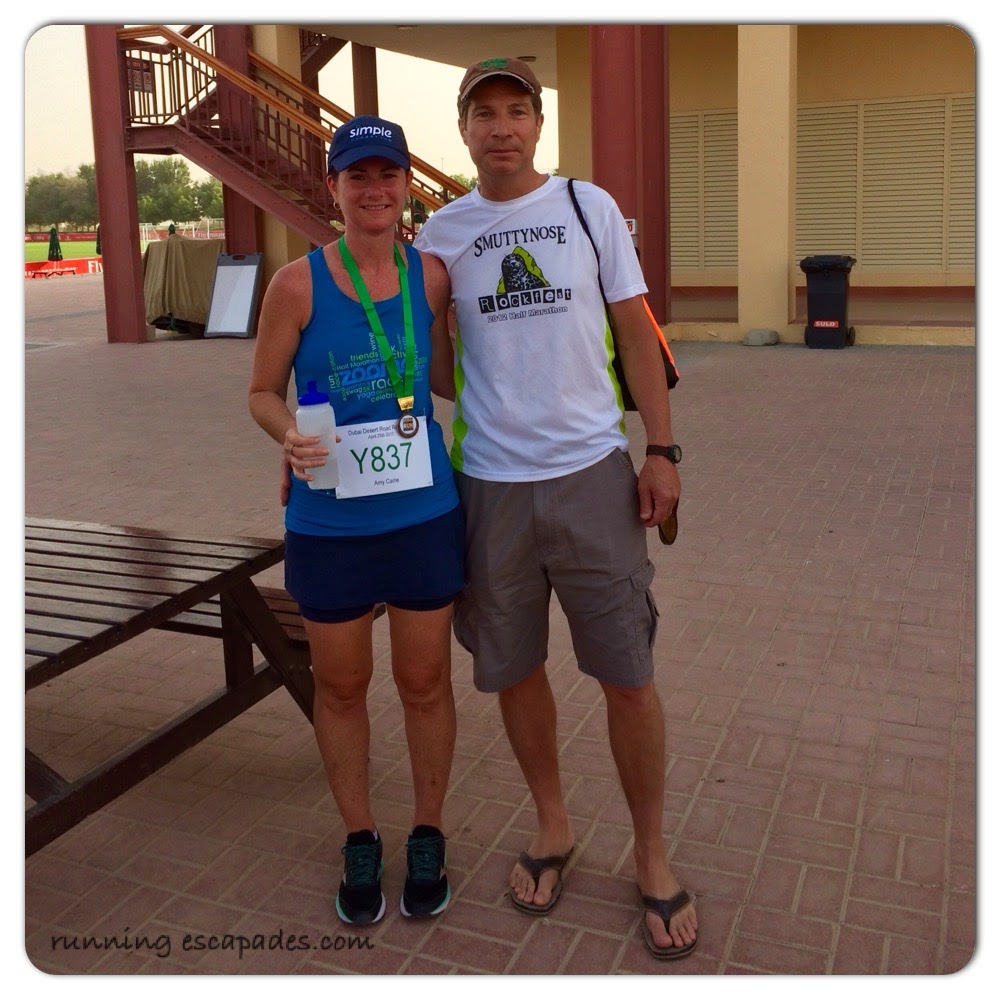 After cooling down, we skipped the awards and made our way out to find a taxi back to the hotel.

Have you ever run a race in another country?