Having already completed Hong Kong Trail Section 8 (Dragon's Back) twice and recently completed Sections 1-4, it just made sense to join a couple of the SWIC ladies who were doing Sections 5-7 so I could say I finished all 50km of the Hong Kong Trail.

I met the girls at the Jardine House Starbuck's in Central. I don't normally get coffee from here, but I was early and thought it would guarantee me a pass to use their toilets. It went really well with my gluten free raspberry protein bar, too (recipe). This is a great meeting spot since the bus terminus at Exchange Square is right across the street. 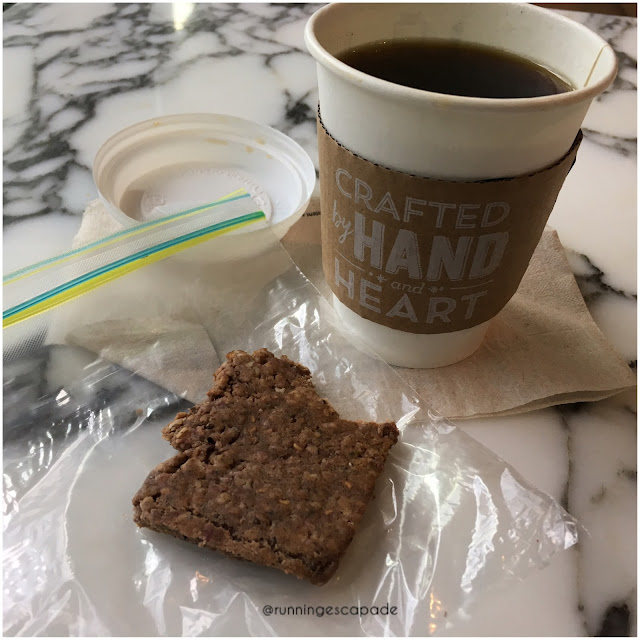 Section 5 trail head on Wong Nad Chung Gap Road is easy to find, but that's the only thing that is easy about this part. There are two peaks to conquer along the way which means a ton of climbing. 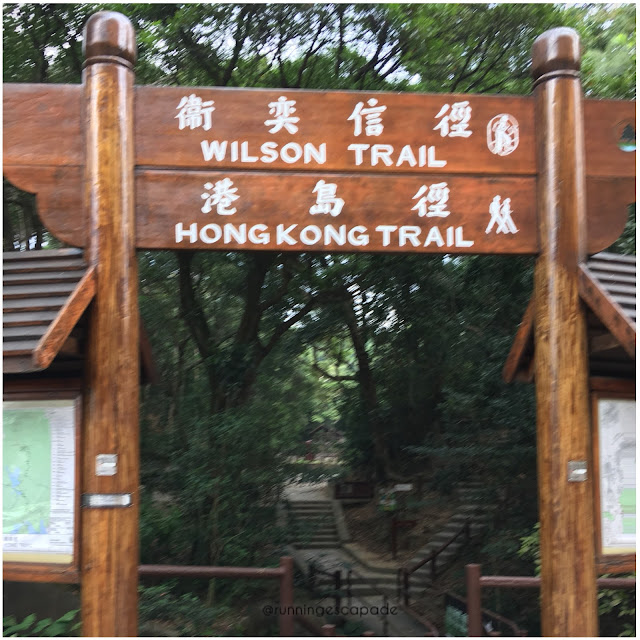 This section should just be named the STAIRMASTER! I'm pretty sure all 4km are steps going either up or down (maybe a slight exaggeration, but not much) which is why this part is tagged as hard. 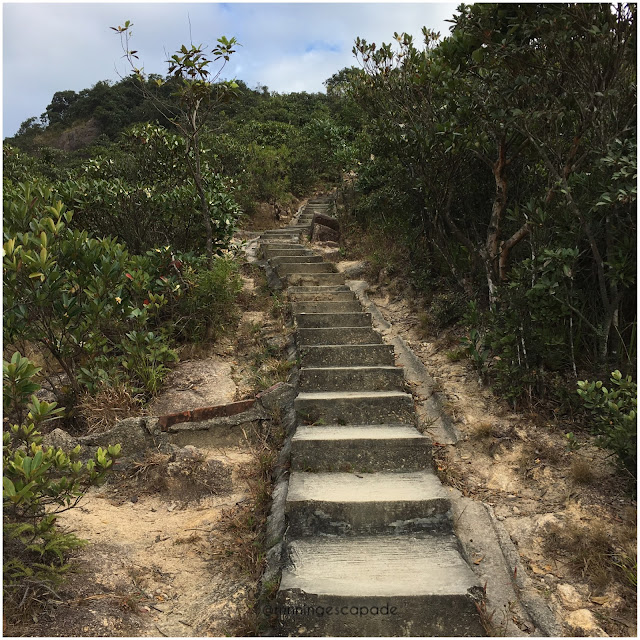 The reward for all that climbing of course is the spectacular views. At 433m, Jardine's Lookout offers great views of the concrete jungle in Central and Kowloon left behind for the day. 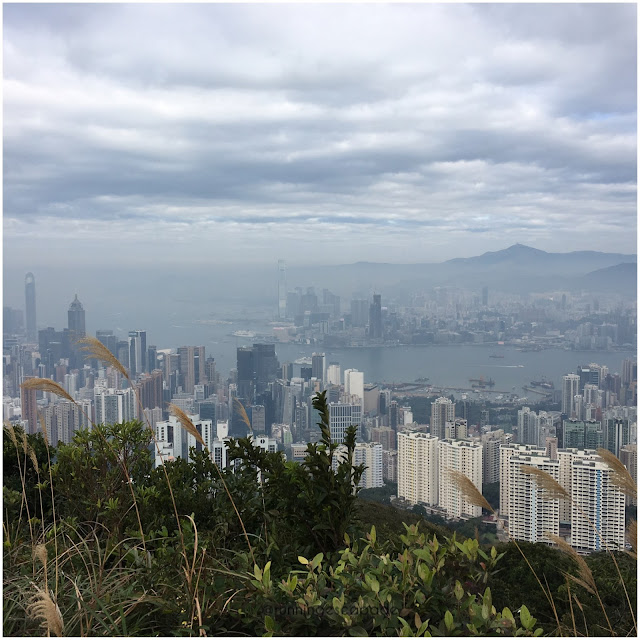 After a short break taking in the views and taking pictures, we headed down, down, down. 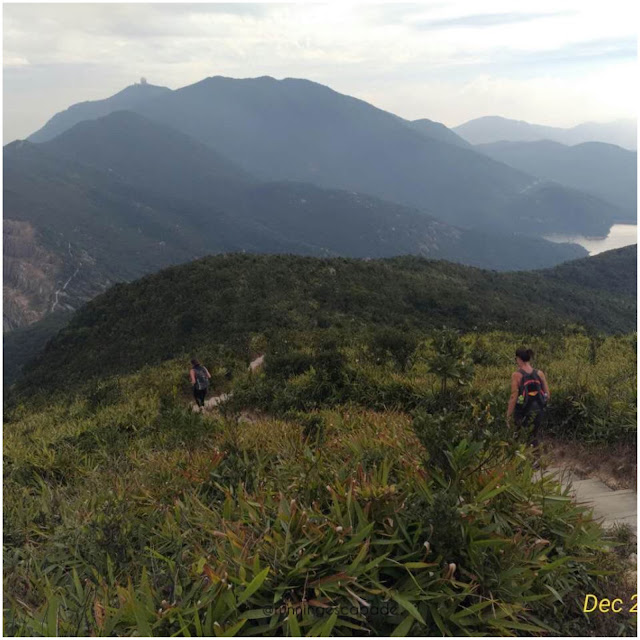 After a lot of steep steps down and then up again, we reached the second peak at Mount Butler (436m). There's something about a You are here sign that helps you quickly forget the demanding climb you just did. 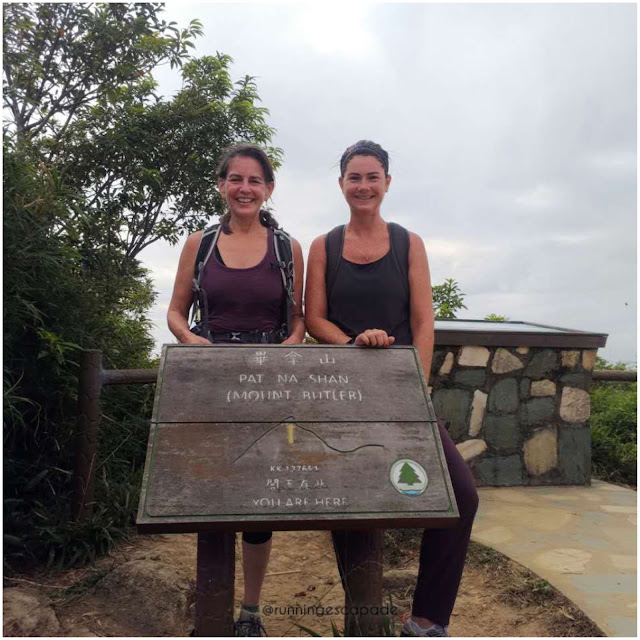 My new hiking shoes were awesome all day, but I still needed to rest my feet overlooking views of Tai Tam Reservoir. Had. To. This would be a great place for a quick snack or even lunch.


After a brief easy ridge walk, we were on our way down again. I've read that there are 599 dizzying steps to close out this section of the trail near the quarry. I believe it. 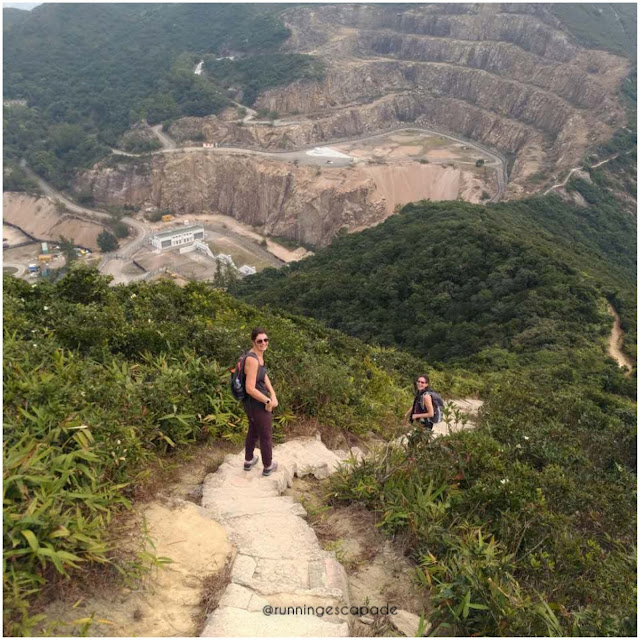 Section 6 starts at Quarry Gap which feels like a rest stop with it's large open space, toilets, shelters, and barbecue area. After a very hilly start to our hike, we took our time and enjoyed a snack break here. 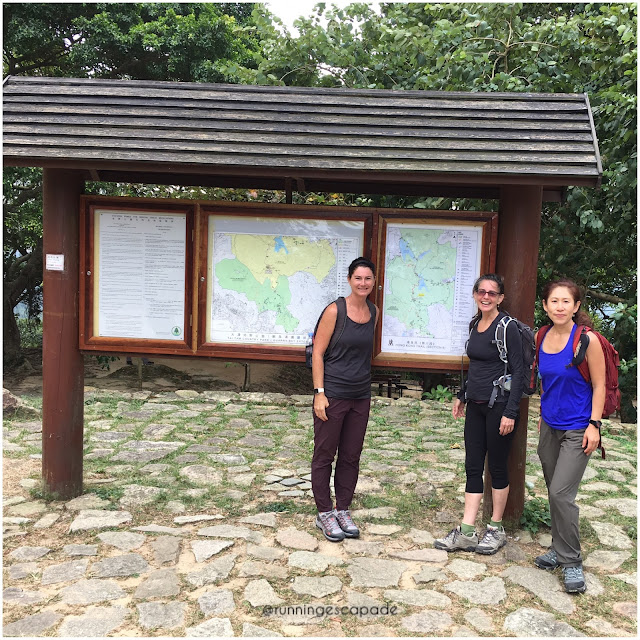 This 4.5km section of the Hong Kong Trail is popular and relatively easy since most of the walking is downhill toward the reservoir and paved. We saw the most people on this section. There are also several big picnic areas before reaching the reservoir which make a perfect spot for lunch if you prefer a quieter spot than Quarry Gap which we did. 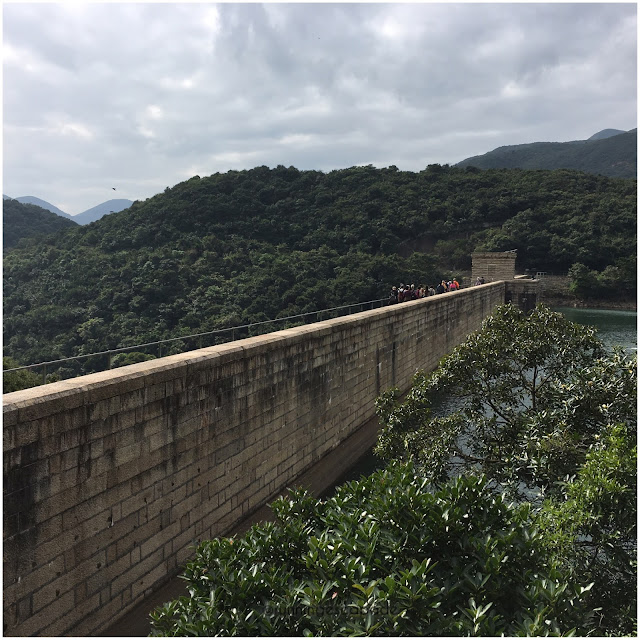 The trail goes across the different reservoir sections (I think there are four) and although there are signs posted asking to not feed the fish, people were indeed feeding the fish. They look well fed!! 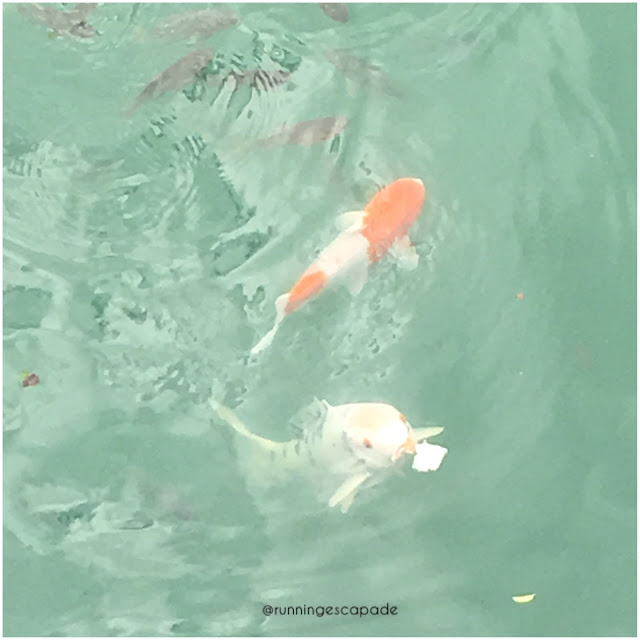 The last part of this section is dirt trail and nicely shaded. This worked perfectly for our hike as the sun peeped out from the clouds around this time. 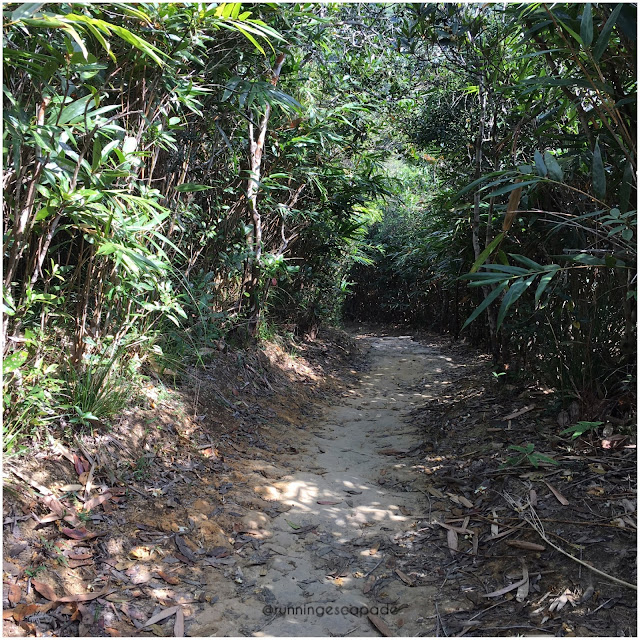 Section 7 was the longest section of our hike this day at 7.5km and again mostly concrete. Like all the other sections, the start is marked by a large map (Hint: this information plays a crucial role in events later). 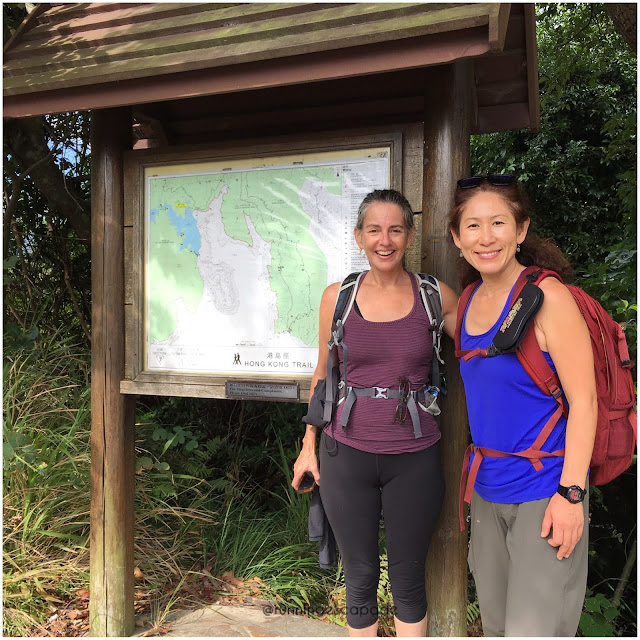 This section of the trail is not very exciting. Most of it runs beside the water catchment. It is level though, so the walking goes pretty quickly. Nearing the end we got some great views of Tai Tam Harbour and the surrounding villages. 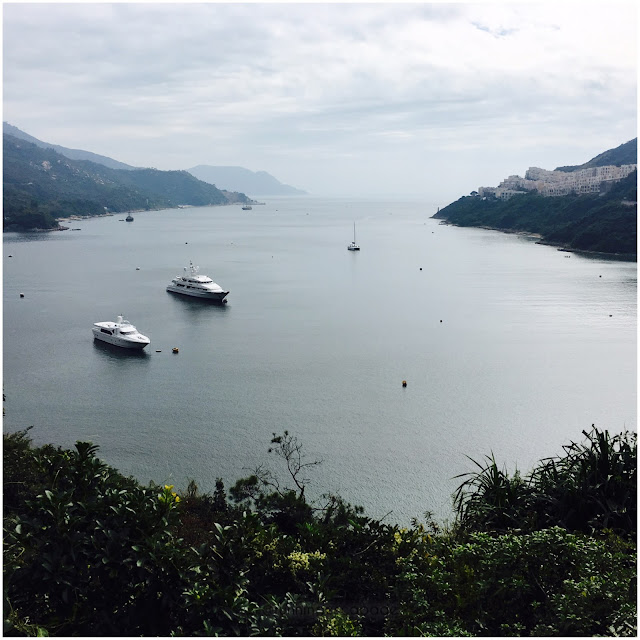 We knew that this part would be mainly flat with the exception of a large section of steps (700 according to the Hong Kong hiking website). Although we didn't see a trail sign, we took a set of 700 steps up to what we thought would be Shek O Road. Turns out we were 2km EARLY. There was no section 8 trail sign waiting for us at the top. 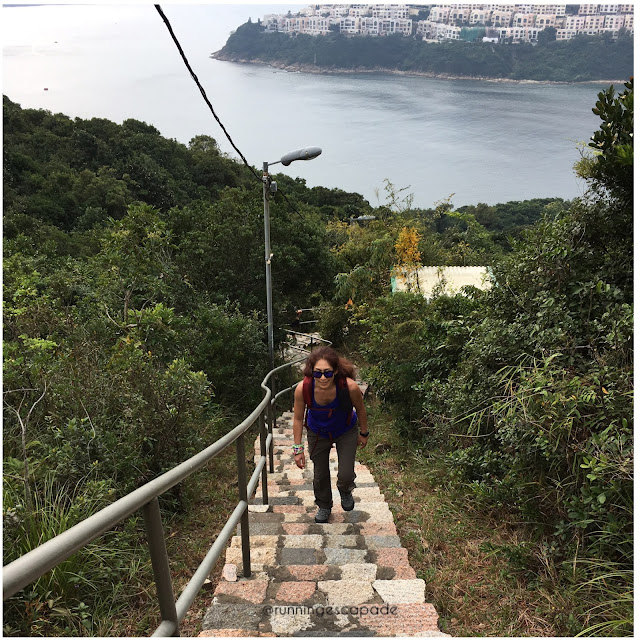 Even though I missed 2km of section 7 (I was too tired to go back down to walk 2km and climb another set of 700 steps), I'm still calling myself a Hong Kong Trail 50km finisher! (sidenote: we took some bad advice from a couple of hikers near these steps ---> always refer to your own maps and trail descriptions!) 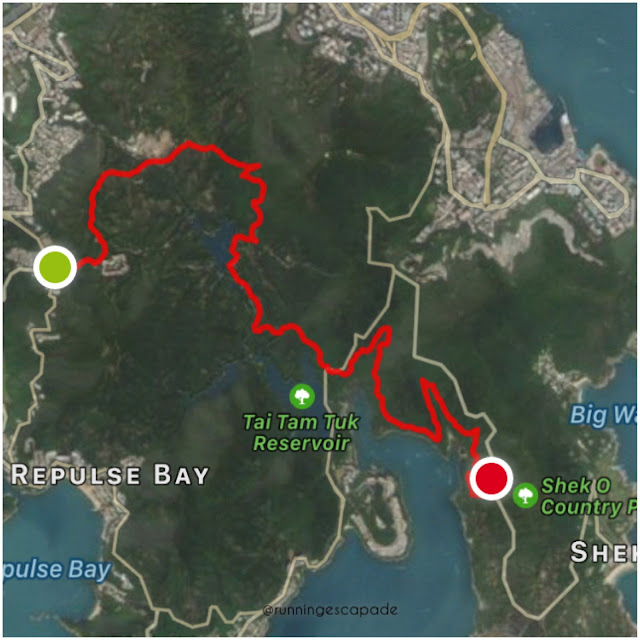 We were still able to catch the bus to the metro station and head back to Central. Although it was a weekday, the bus was so crowded we had to stand. After walking most of 16km on concrete, my feet were tired and all I could think about was sitting down.


Tell me...
What is your favorite coffee spot?
Do you wear hiking shoes or regular shoes on hikes?
Would you have gone back to do the 2km (plus 1400 steps)?