How To Test A Runner:

Host a half marathon (my favorite distance) in Newport (my favorite place) over Columbus Day weekend (my anniversary), add a running spouse (mrC) and and injury.

That's me, and this was my test.

mrC picks one half marathon to do with me each year and for 2014 it was the Newport Half Marathon. After hitting my highest monthly mileage in August, I have been dealing with one small injury after another. Just days before this race, I was worried that I wouldn't be able to finish 13.1 miles with him.

After taking an easy week of training, we eased down to Newport on Friday night. Saturday the weather was yucky, so we drove the course. We don't do this often, but since we run the Newport 10 Miler in the spring, we wanted to compare the courses. 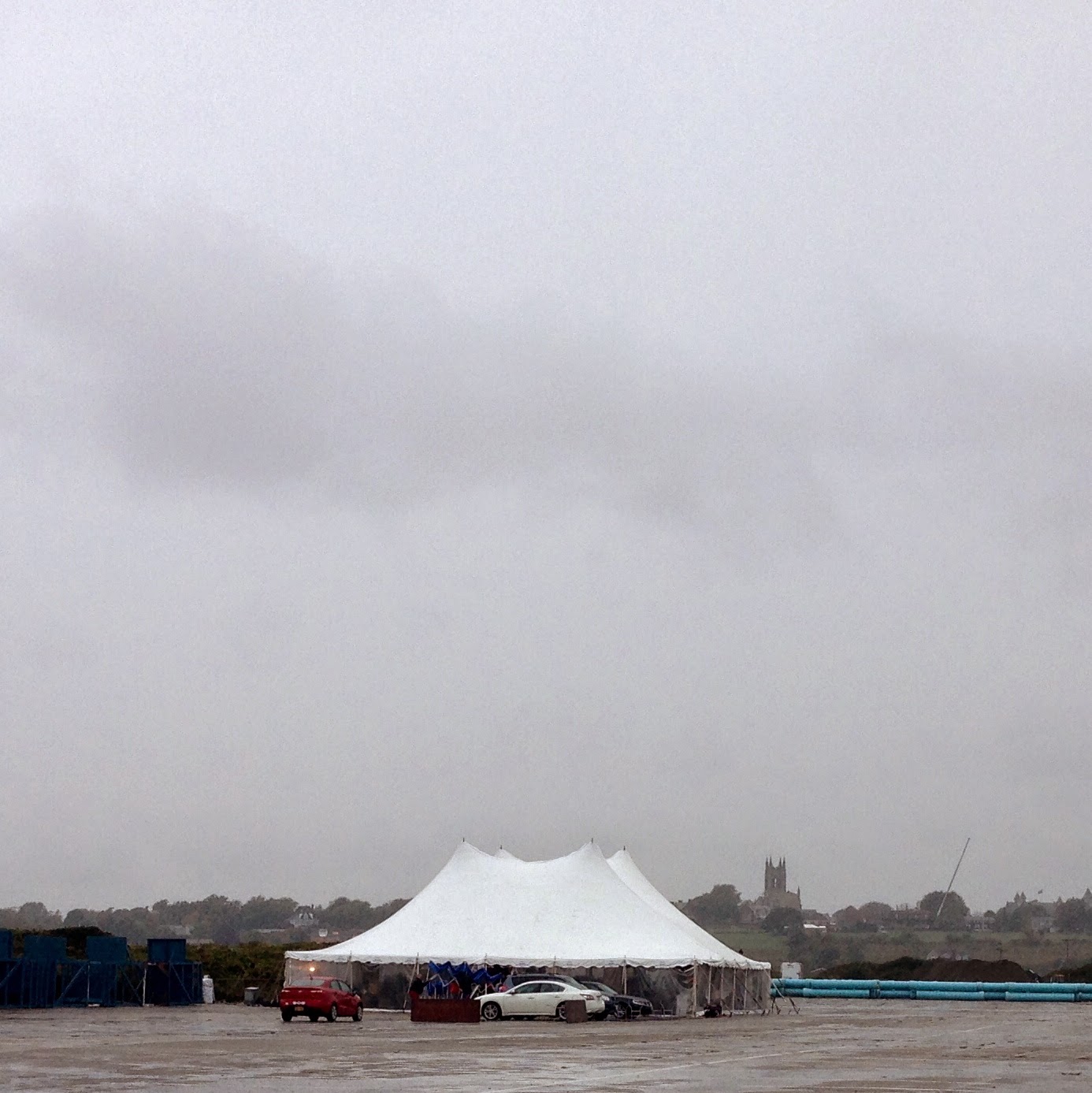 On race morning, getting to the starting line required using a shuttle bus from an off-site parking lot and a lot of patience. 5000 runners plus spectators trying to make their way to the starting line at the same time in Newport means one thing: traffic. But is also means spectacular sunrise views. 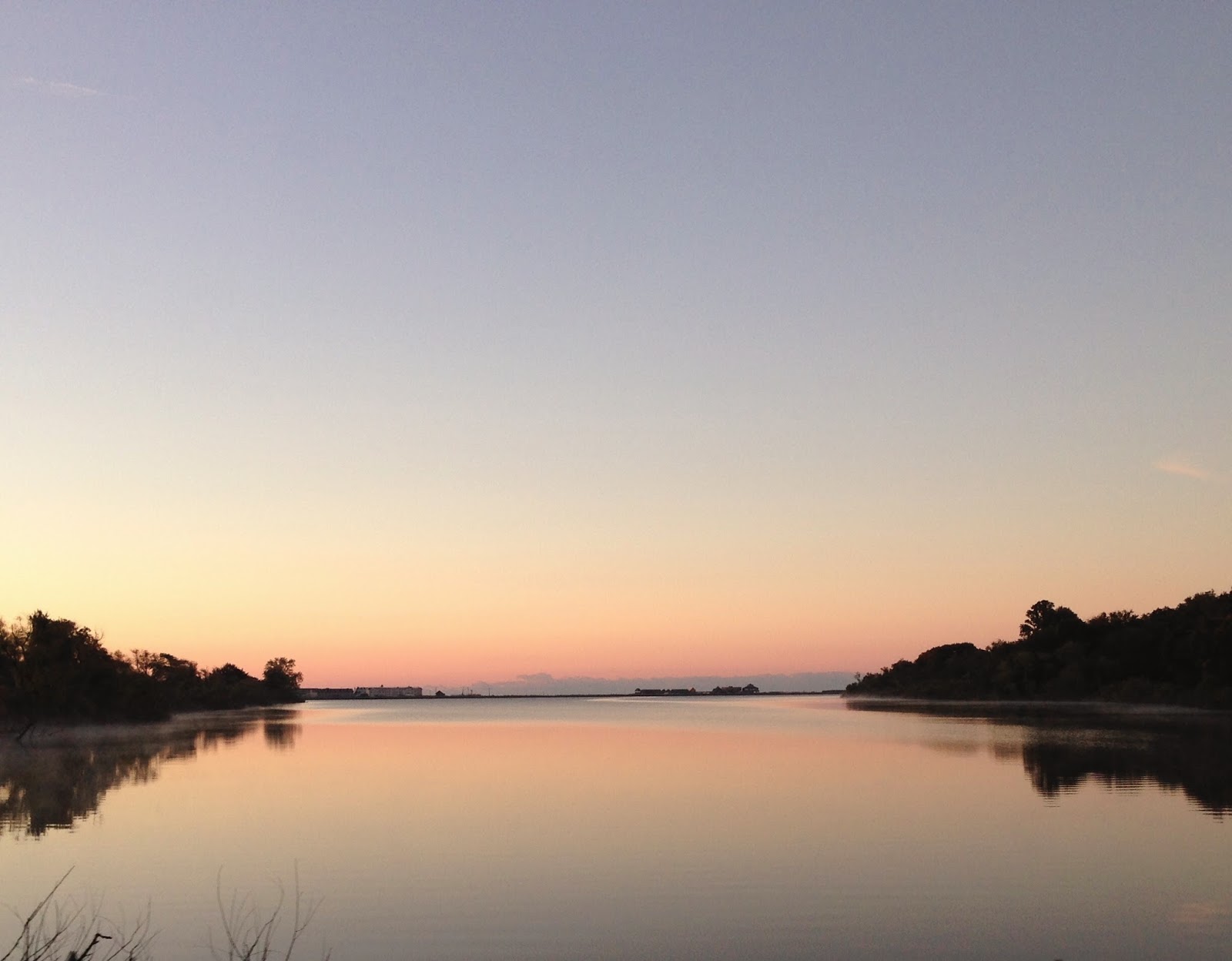 The shuttles were quick transporting us the mile or so to the start. At the venue, we found dozens of port-a-potties, locker rentals,  gear check and Oiselle Flockmates! Even though it was a cold morning, we had plenty of time to stretch and eat the bananas we brought along. My last half marathon was a fueling failure, so in addition to having a PB and jelly rice cake, I've been forcing down bananas.


Let the test begin: The biggest hill of the race is in the first half mile (the best place for it if you ask me). mrC and I ran up this hill in February when we ran the Newport Night Run 5K. At the top of the hill, the course flattened out for the next three miles as we made our way to Fort Adams where we began following the 10 Miler course. It was around this time that I knew my hip was going to be questionable. 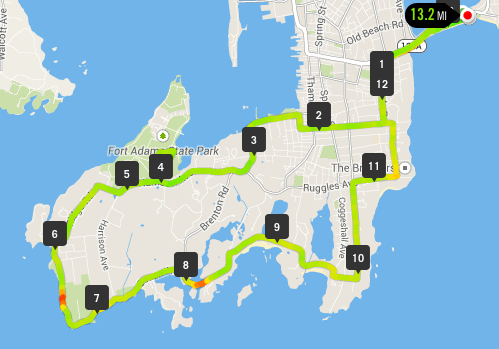 Around mile 6 we turned onto Ocean Ave and started taking in the amazing views. The first aid station with energy gels had run out and I started stressing that my fuel plan to take gels every chance was about to fall apart. 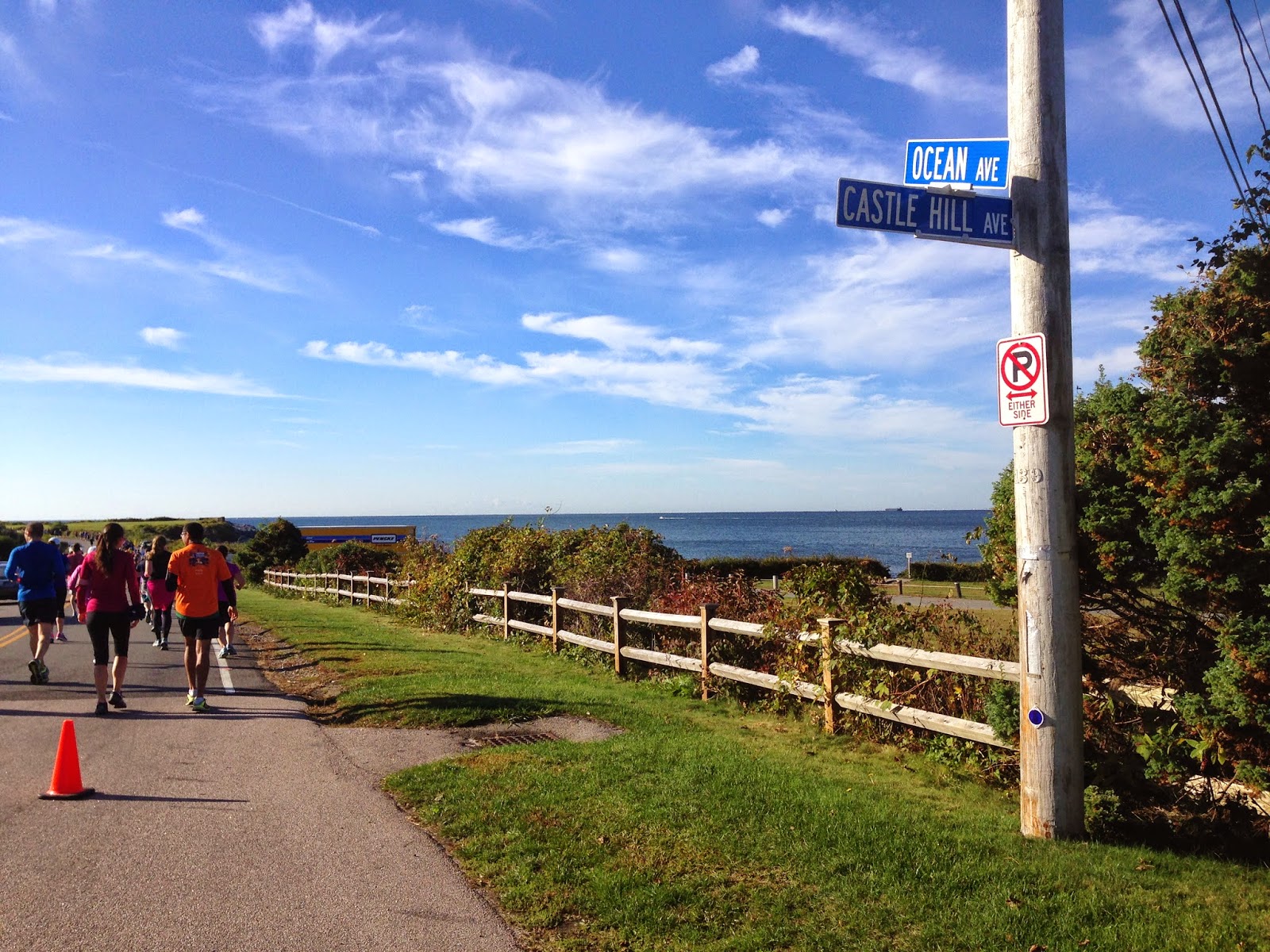 Miles 7-10 are a series of rolling hills leading to the turn onto Bellevue Avenue where the course opens up to the mansions. Other than my achey hip, I was feeling good. The aid stations after mile 6.5 had energy gels, so my fueling plan was back on track. The temperature had warmed up enough for me to pull my arm warmers down and I was glad that I hadn't over-dressed. 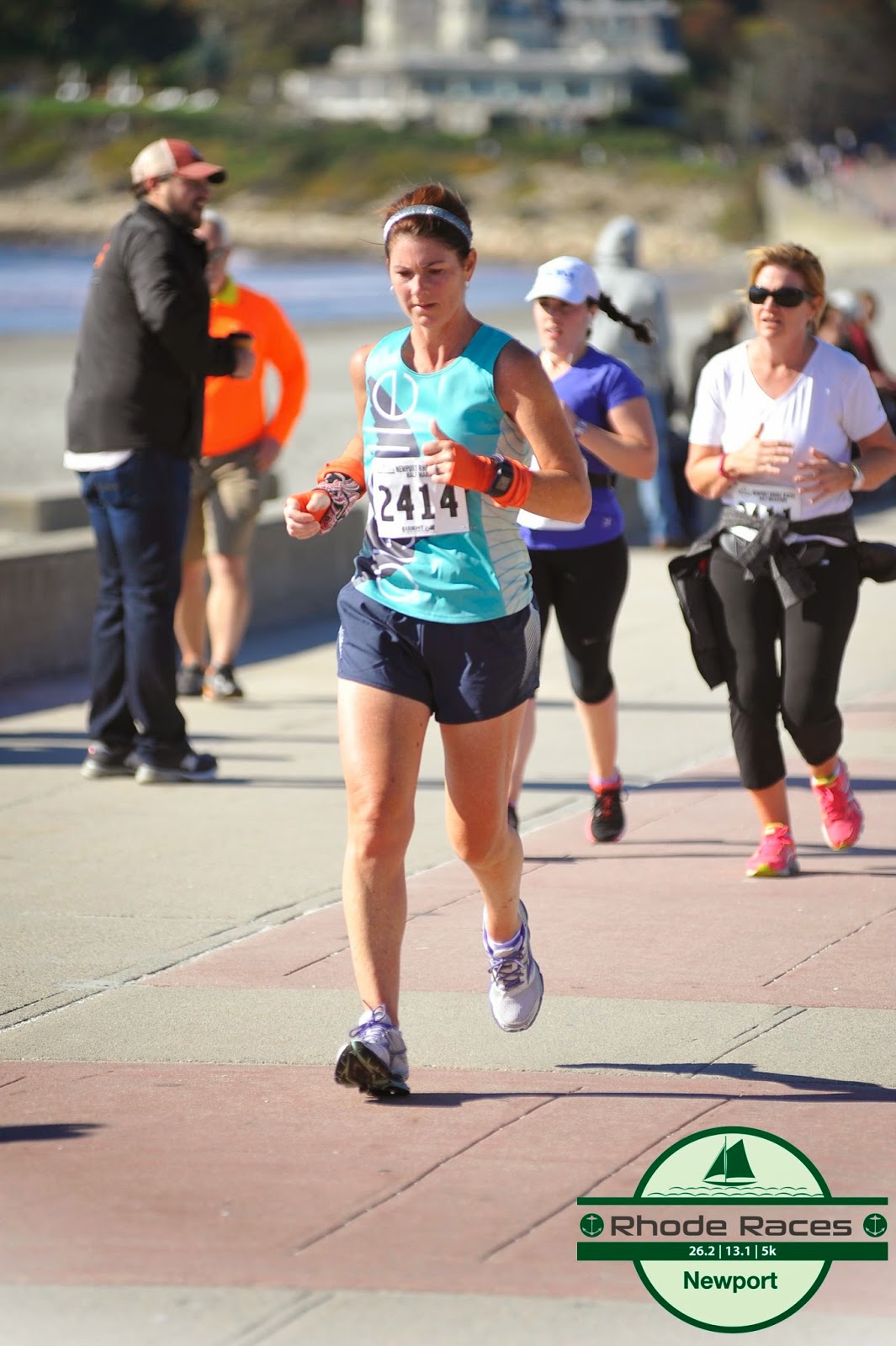 This race is one of the few with a downhill finish and starting at about mile 11, I was focused on getting there. My hip was getting more painful with every step and I thought the downhill would bring me some relief. However, when we turned onto America's Cup Boulevard and started the decline, my hip started to feel worse. 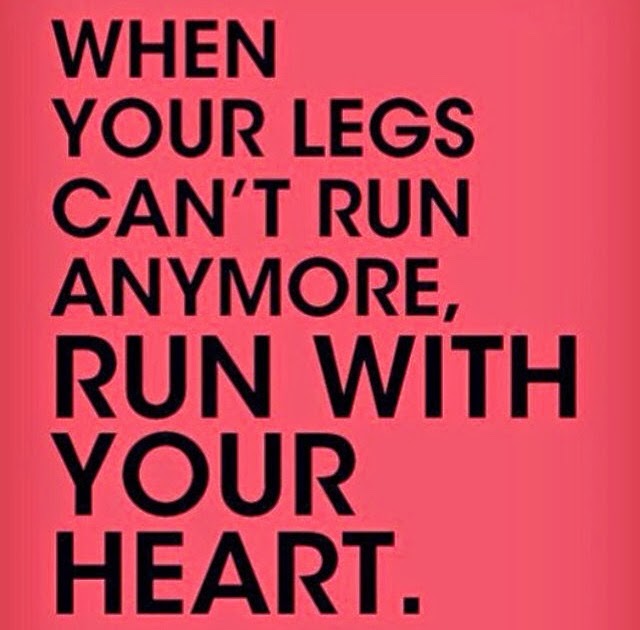 Somehow, I made it across the finish line. After accepting my medal, I entered the medical tent to grab an ice pack for my hip and then went to the food tent to see what goodies they had for us. 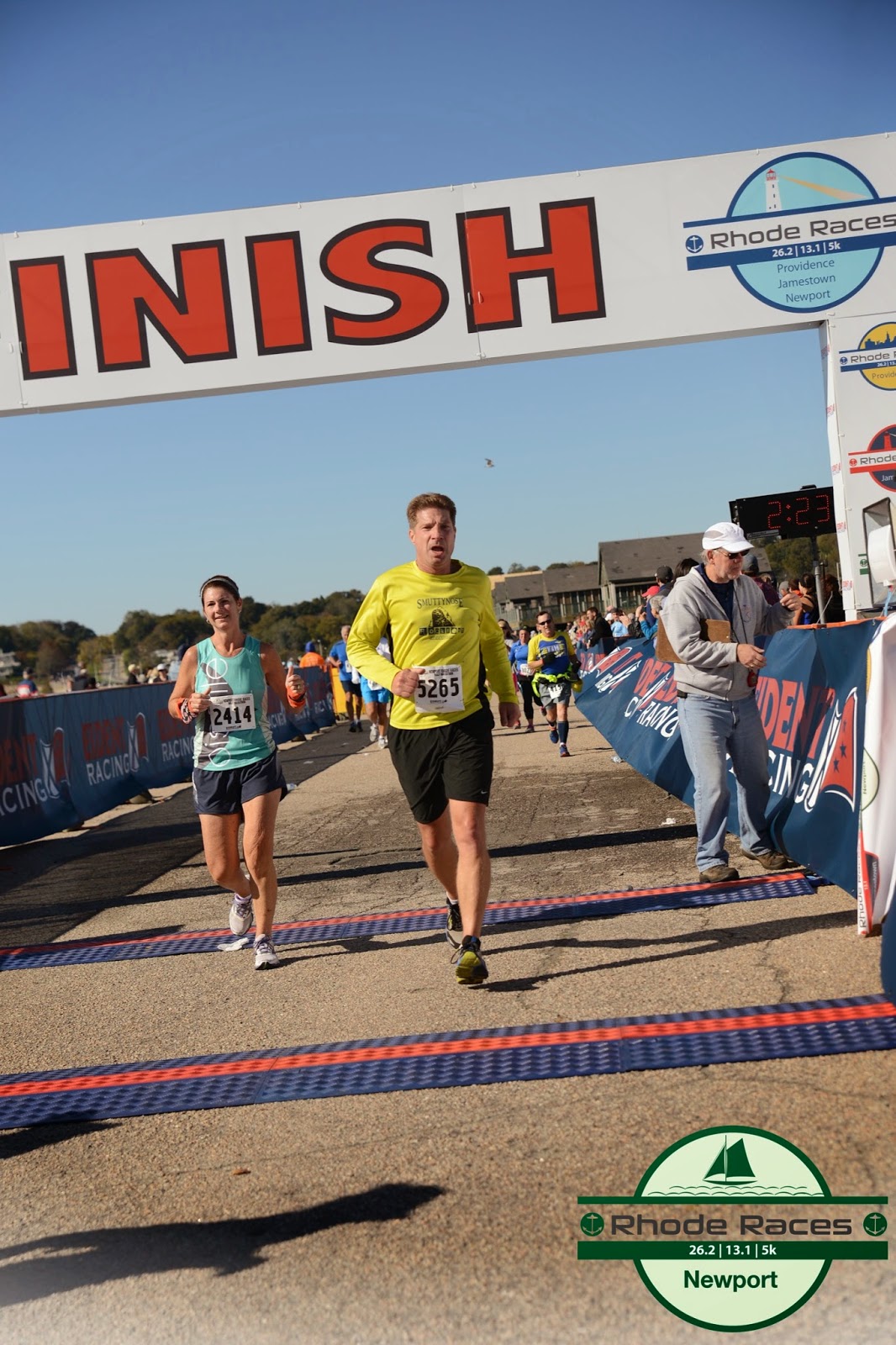 We spent a little time on the beach, soaking up the October sun before walking over to the shuttles for a ride back to the parking area. Pain aside, I loved this race. Newport always delivers a great race-cation and I would definitely go back with mrC to do this one again. 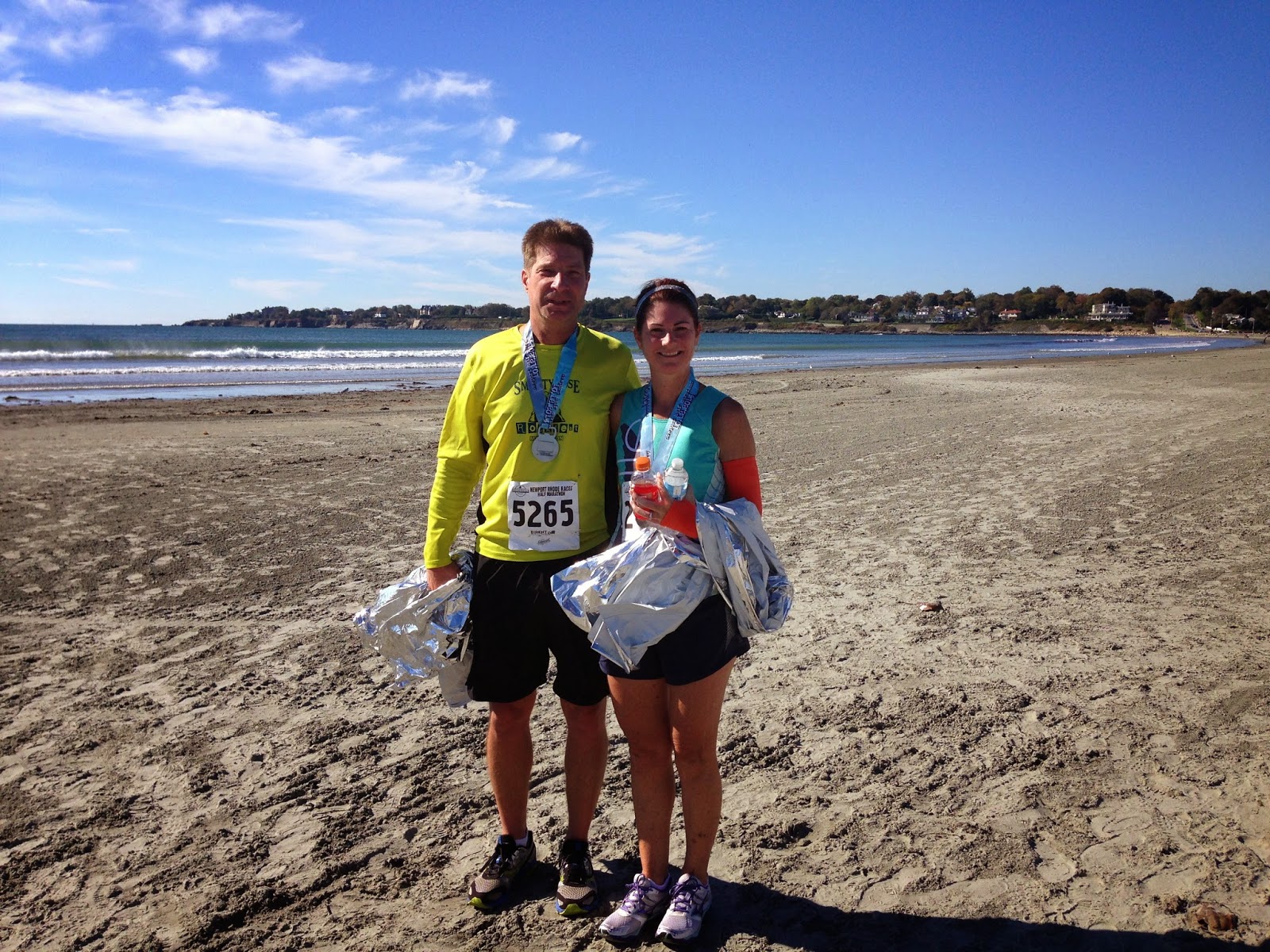 Once we were back home in NH, I hung up my Newport Half Marathon medal and thought to myself, I passed the test.

It's almost a week later, and I'm still dealing with pain in my hip, which is actually my sartorius muscle. I won't be running again until I can do it pain-free.