I'm so excited to write a race recap ---> even if it was an un-timed fun run!

It was almost two years ago when I ran my last race in Shenzhen, so I was pretty excited to finally be in a place where I could run again. So over Halloween weekend I ran The Infected Zombie Run 5K. 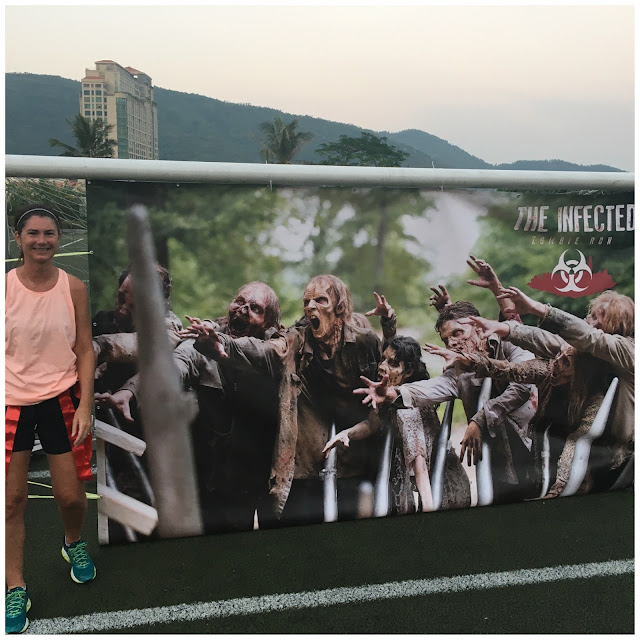 The Infected Zombie Run 5k is a charity run for an organization called Soap Cycling. This organization recycles hotel soaps and distributes the new soap to children in disadvantaged communities around the world, especially Asia.

This event was a perfect way for me to see how I could do in a 5K event. 1) It was right in our neighborhood, 2) mrC was available to join me adding to the comfort factor (and he invited his co-worker who was in Hong Kong), and 3) since it was a fun run, I figured there would be a lot of non-competitive people running.

(I had originally planned to wear a costume, but it was way too warm for my idea. Instead I went for Halloween colors in my black shorts and orange racer back (affiliate). 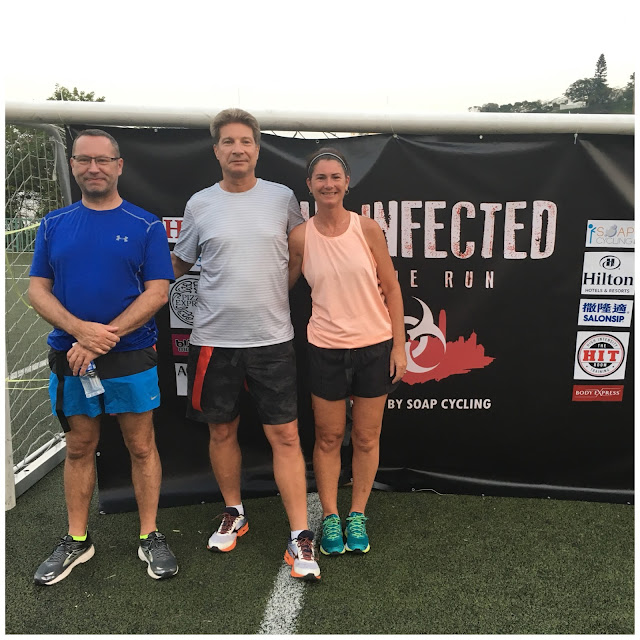 The theme of the run is to escape zombies that have invaded your neighborhood. Here's part of the email we received prior to the event:


Dear Runners,
A zombie virus has emerged and spreading rapidly across Discovery Bay, putting the entire human race at risk of extinction. Details of the evacuation are as follows:

Each runner received a belt with three flags attached. Each flag represents a life. As you run, zombies (volunteers dressed in zombie makeup wearing red shirts) try to take your flags. The goal is to finish with at least one flag (that means you lived).

This was the first time the Zombie Run was being held in Discovery Bay. It had a few hiccups (it didn't start on time, the organizer tried to explain the rules and route to about 150 people without a micro/megaphone and the set up at the finish had people stopping before the final loop through the park), but most people were happy to overlook these bits and have fun. 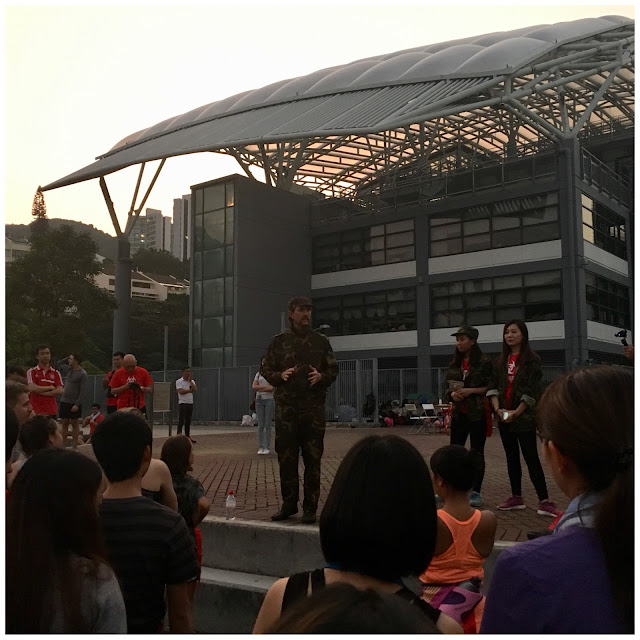 The course was a simple out and back with a loop through the park at the end. The Zombies were waiting for runners along the promenade and in the park. It was quite fun trying to avoid them. I actually had all three flags when I entered the park, but the zombies waiting there were much more eager to grab them. 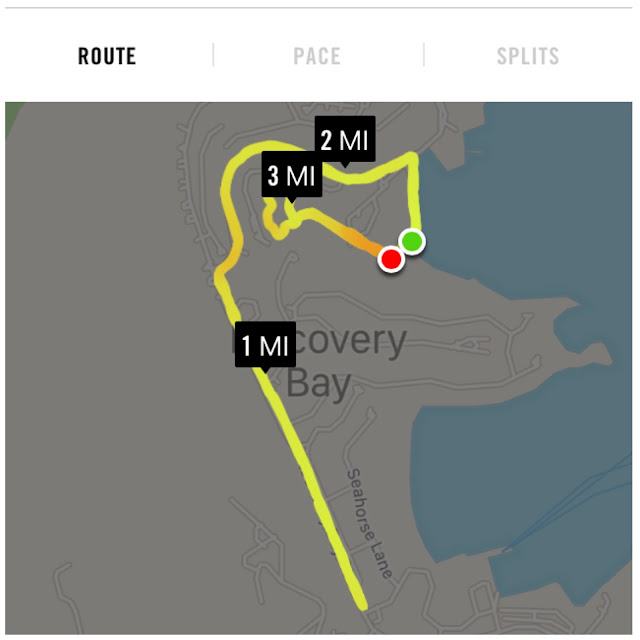 At the halfway point, runners received dog tags. One dog tag was placed in a draw at the finish line for a chance to win a prize. mrC's co-worker won a t-shirt, but it was too small, so he gave it to me ;)

The goodie bags we received included several coupons, a race tee and a sweat towel (which comes in handy living in Hong Kong). 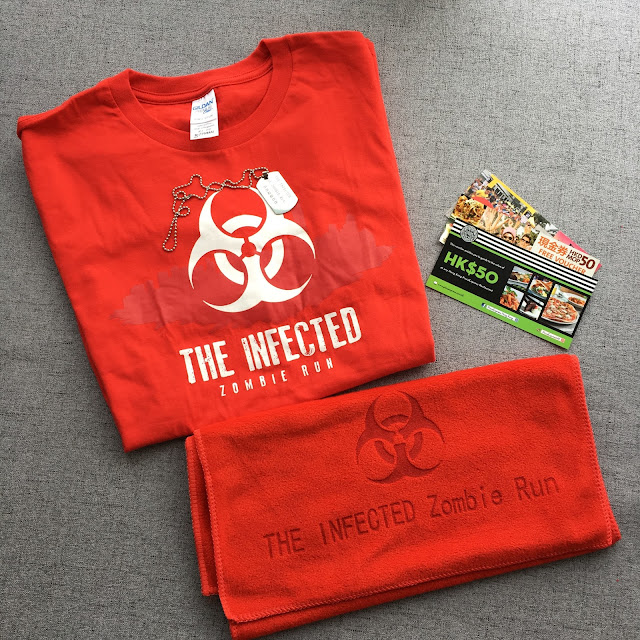 Even though we had to run up and down two hills, the race went really well for me. My knee felt good and I saved my walks for when I needed them (up the big hill) and when I ran out of gas near the end. I don't think much about my times anymore, but I was excited to see that I had negative splits for the first time in FOREVER. 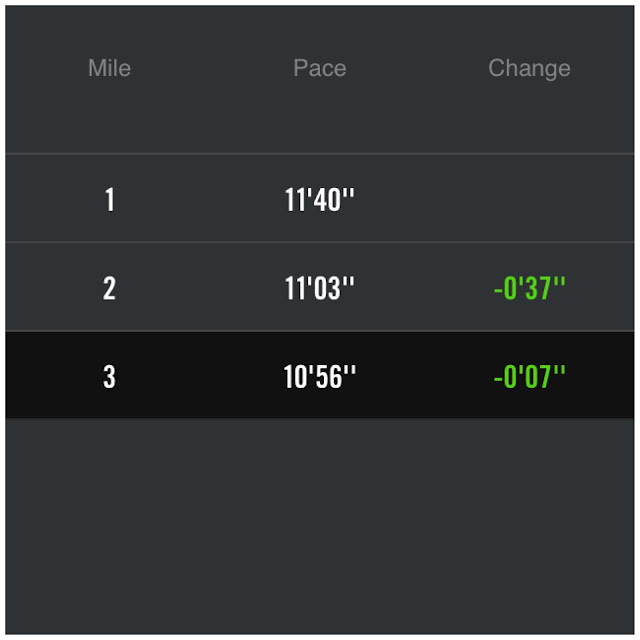 I really hope this event returns next year. Until then I will be looking forward to another 5k in Hong Kong sometime soon.

Have you ever run a Zombie Race?