When mrC gets a good layover, we've learned to take advantage of it. This trip was perfectly timed too. It was my birthday, Valentine's Day and Chinese New Year (a great time to escape the never-ending fireworks).

The Maldives, located in the Indian Ocean and spread across the equator, is made up of 1190 atolls (an atoll is basically a clump of islands). About 200 atolls are inhabited and half of those are resorts. At The Bandos Island Resort we were among approximately 450 guests. Transport to the island is by boat only from the airport (which is its own island) and takes about 15 minutes. 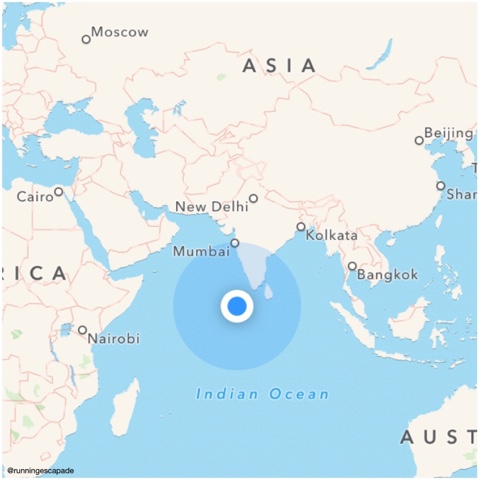 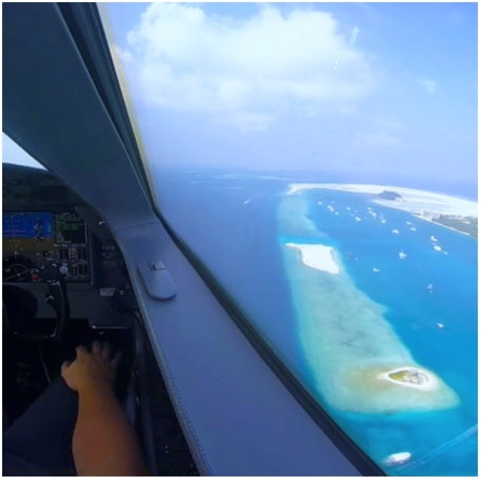 Right away it was obvious that people come to the island to unwind. It's not like other destinations where you fill your days sight-seeing (although you can by signing up for the island hopping excursion). The island itself is only a half mile loop to walk around. Even though it was small in comparison to other places we've been recently, there was plenty to do and all of it was relaxing.

My body's disregard for local time made it easy to catch the sunrise and it was worth it. 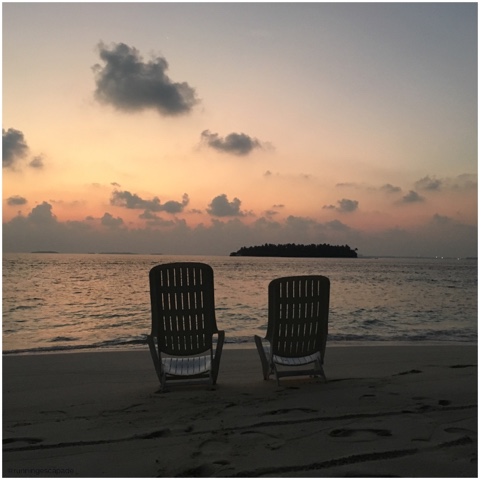 The resort usually offered morning yoga, but since the yogi was off the island I did my own yoga on the beach. 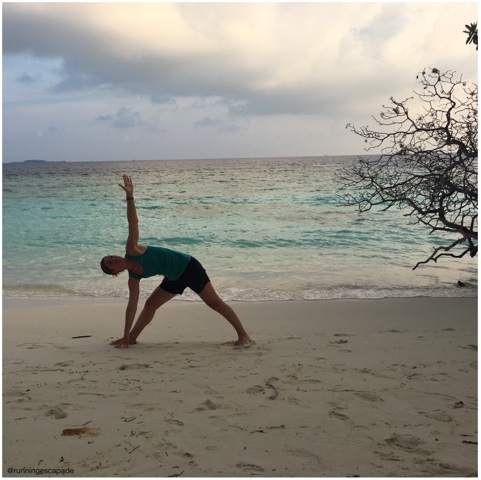 Two laps around the island was a mile and running was a popular activity for many. mrC and I squeezed in one short run while we were there. 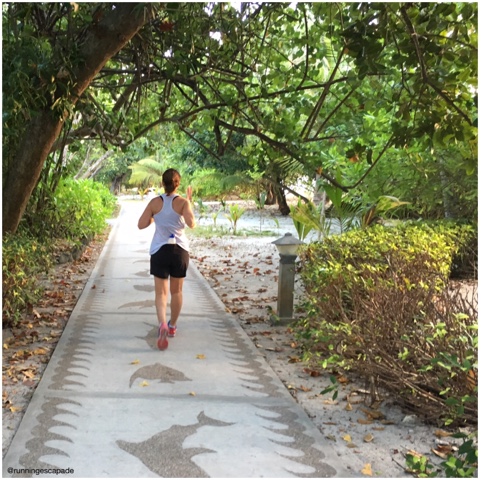 Snorkeling was the main attraction. Boats filled with people came from surrounding islands to explore the coral reef. We spent every morning after breakfast in the water and a couple of afternoons too. 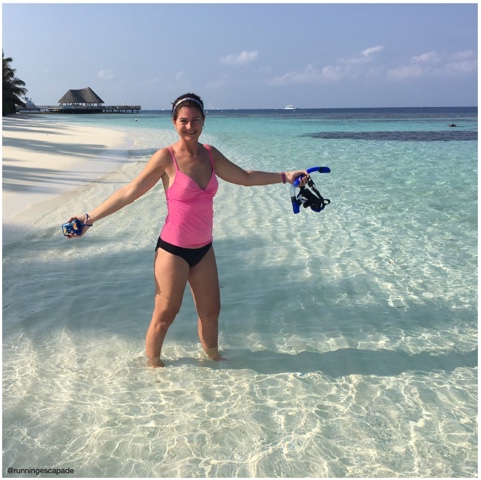 The crystal clear water was filled with an abundance of colorful and friendly sea life. The most exciting was to see the Black Tip Reef Shark. We used a disposable underwater camera to take pictures (which may be awhile to develop here in China), but mrC's co-pilot caught this picture with his Go-Pro and shared it with us. We saw these sharks several times while snorkeling and one swam  right by us when we were sitting in the lagoon! 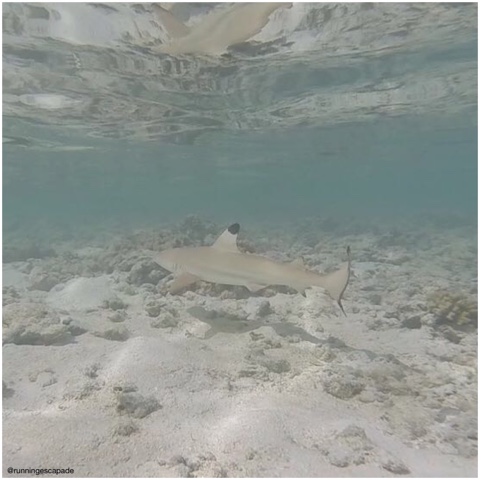 When we weren't at the beach snorkeling, we enjoyed the beauty of the island on several walks. 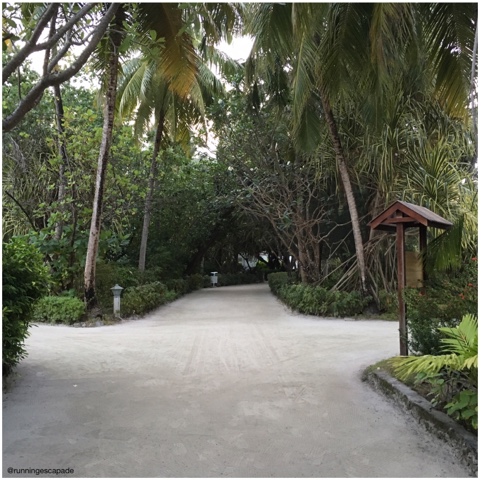 Every time we went for a walk we discovered something new: the Valentine tree, crushed glass mulch, an island nursery. 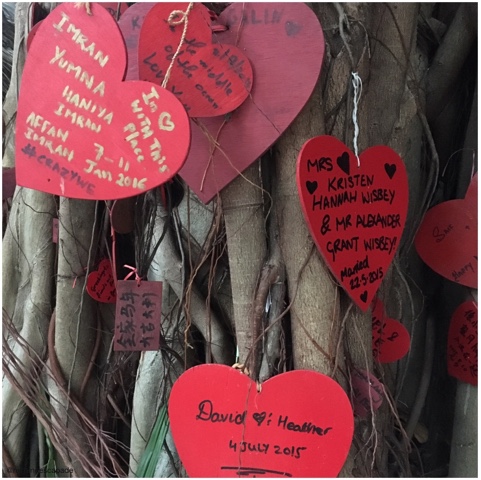 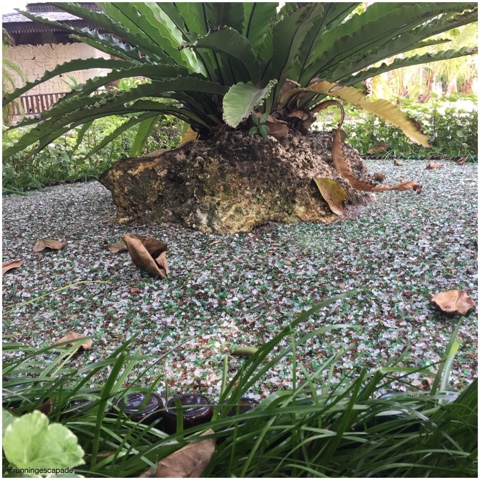 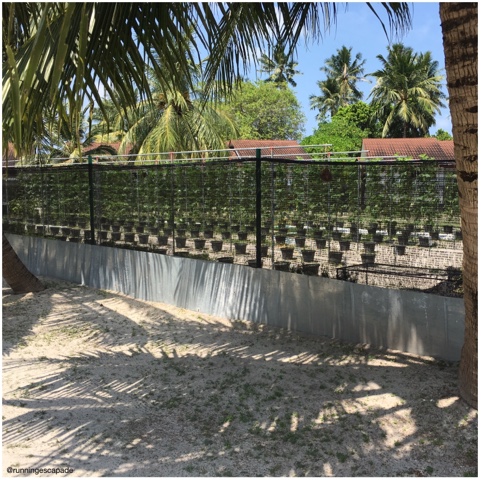 When we tired from walking and playing in the golden sunshine, we relished the ocean breeze and crashing waves from any of a dozen cozy resting spots. 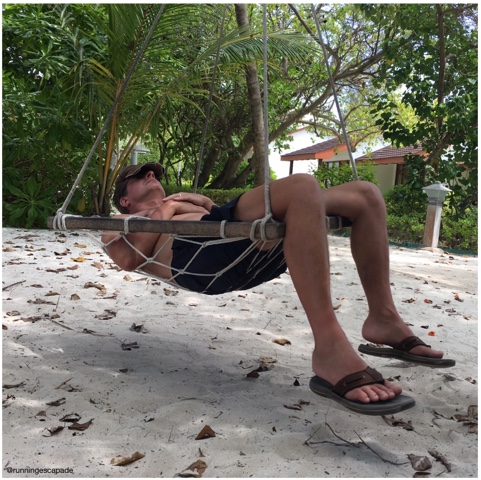 Breathtaking sunsets were the appetizer or the dessert depending on when we made it to dinner. Either way, the pinks and oranges did not disappoint. 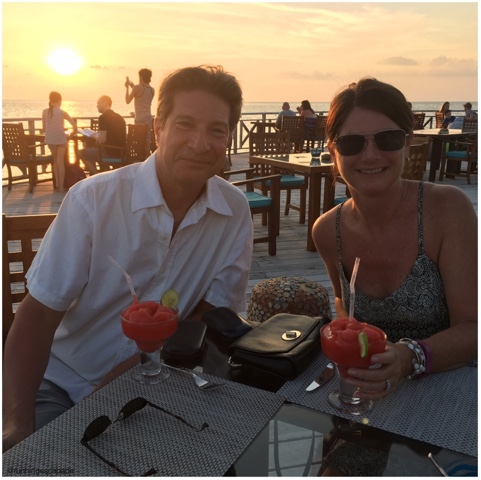 In addition to the main Gallery Restaurant, where pre-paid buffet style meals were served (and where we had breakfast each day), guests could also choose from three dining experiences.

Huvan Restaurant located on the west side of island (and most frequented by us) gave diners the choice between land or deck seating. We only ate on land once, opting instead to enjoy being surrounded by layers of blue water and cooled by the constant breeze. 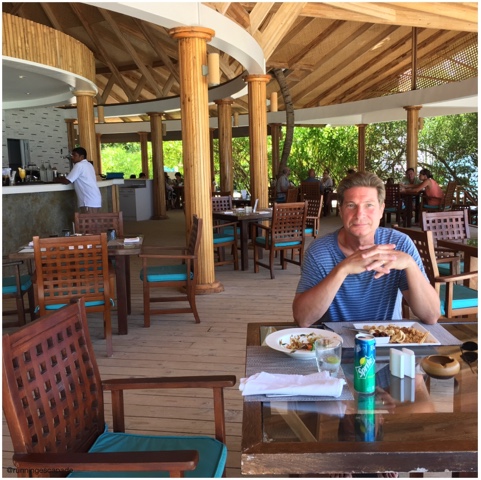 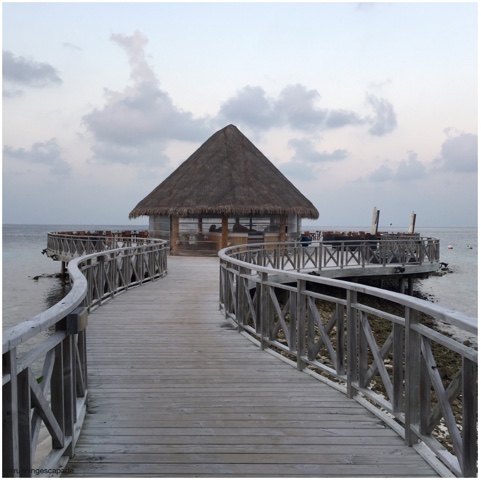 We had lunch at the Sea Breeze, located on the east side of the island. The food and views were very nice, but this part of island, ironically, seemed void of breezes. We wanted to spend more time on the loungers watching the boats come and go, but it was just too warm. 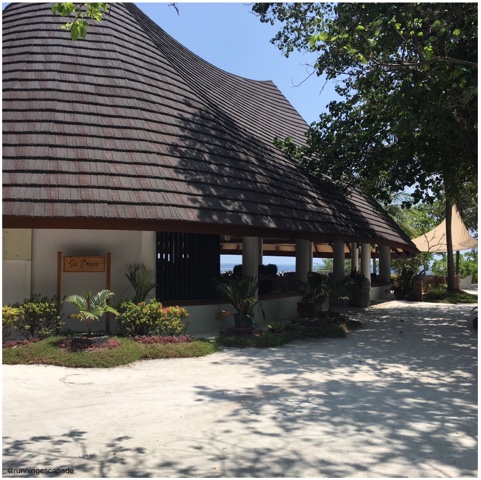 No need to worry about the lack of air since it was only evening dining at Koon Thai Restaurant. Also located on the east side of island and next door to Sea Breeze, it was a great spot for dinner. 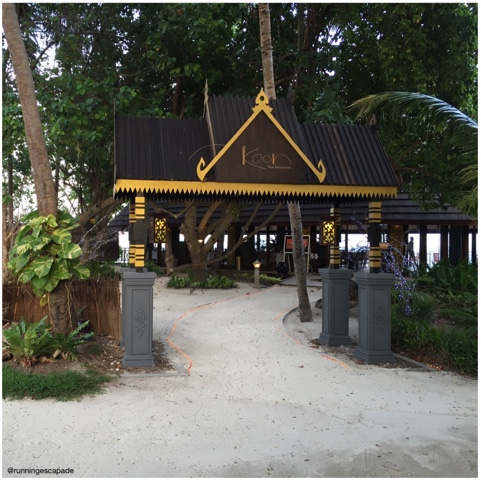 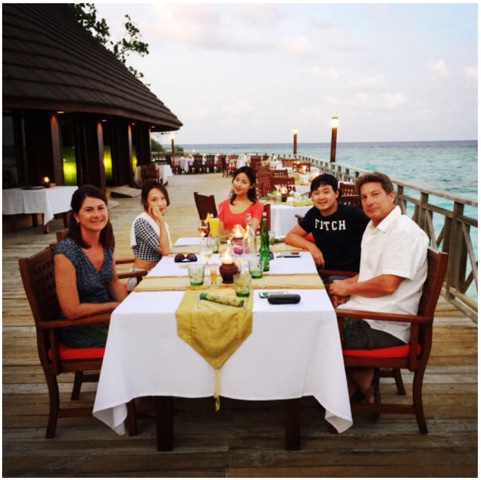 The resort offered specific excursions each day of the week and we signed up for the Sunset Dolphin Cruise. The two hour boat ride had us chasing dolphins while flying fish chased us! It was exciting to see the dolphins jumping and swimming. 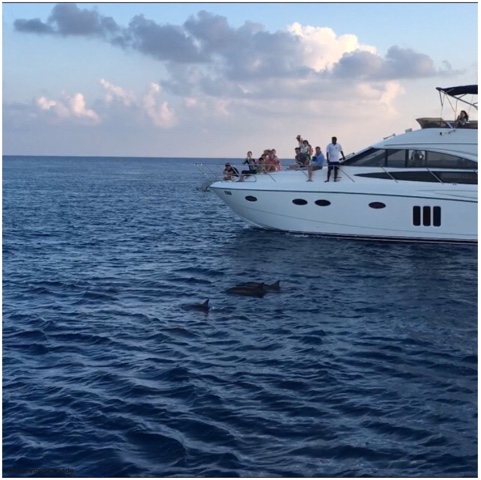 The island offered a wide range of accommodations, from classic rooms in the center of the island to elite water villas floating over the sea. We were quite happy with the beachfront standard room located on the northwest side of the island and a mere 20 steps from the water. 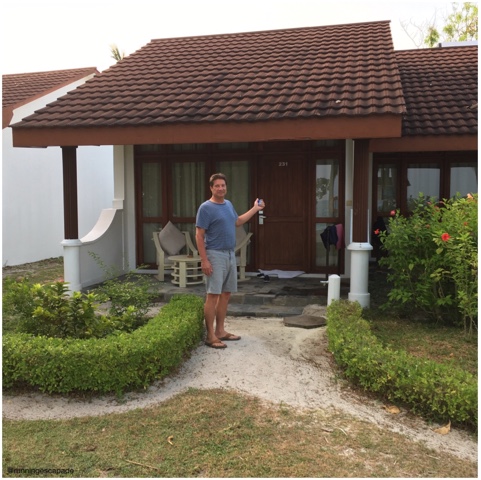 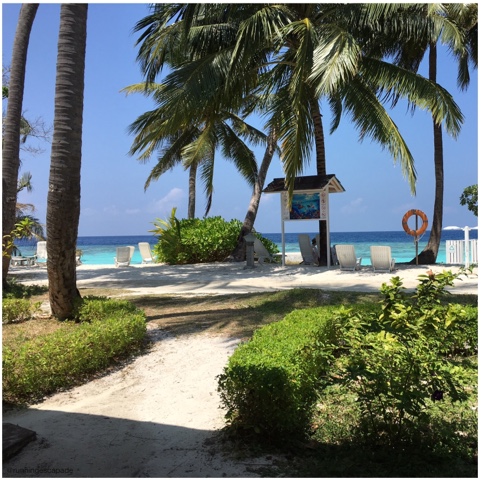 Bandos Island Resort was magical. Most trips that we take have me planning and plotting where we will go and what we will see each day to make the most of our time. This place was different. It was as if the urge to rush about from habit was diminished by the tranquil setting. I've never been anywhere like this before and feel very lucky to have been able to join mrC on his layover.

Have you been to the Maldives or some place like it?