Newport, Rhode Island is one of my favorite places. The Inaugural Newport 10 Miler showcased the beauty and history that attracts so many and benefitted the historic Fort Adams Trust. 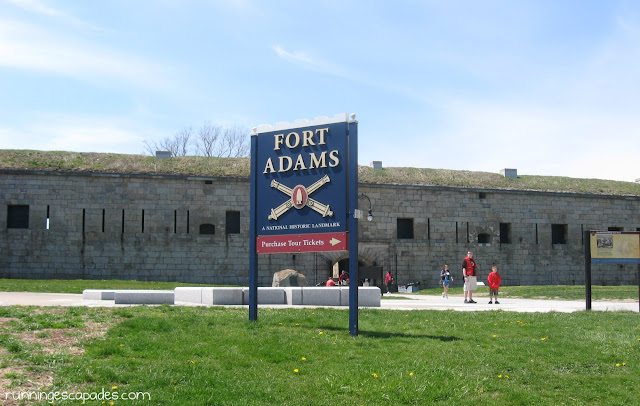 The race not only raised money for Fort Adams, but was held at Fort Adams, nestled on the Narragansett Bay. We picked up our race bibs and t-shirts on Saturday afternoon right on the parade lawn where the race would finish on Sunday and had the chance to meet Matt, the race organizer, from Gray Matter Marketing. 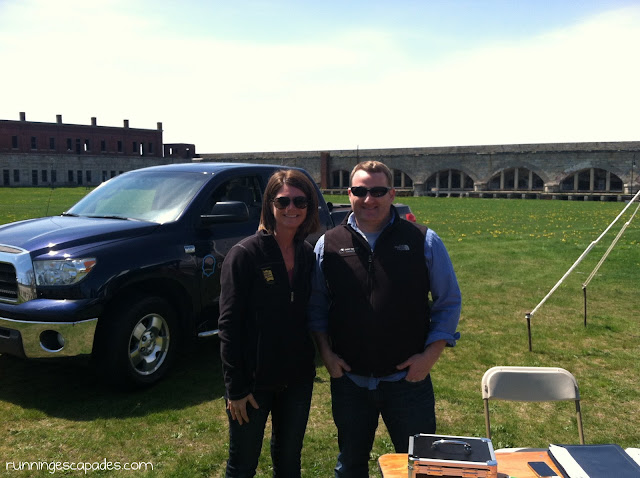 After our usual pre-race breakfast, we headed to the fort to be sure to get a good parking spot. The main lot outside the gates was being used for the race start and then public parking since Fort Adams would actually still be open for tours. The secondary lot was about a mile from the start line, but it was a pleasant walk with great views of downtown Newport across the harbor. Before the start, we met up with some of my favorite FitFluential running friends.

We took advantage of the bag drop (which we somehow missed before heading to Newport and had to use a shopping bag from the NEX, yikes!) and the port-a-potties before heading to the start area. While chatting with Nancy and Jill we learned that the race would not start until 8:15. It wasn't a big deal to me, but for serious runners, it could mess with the whole fuel timing thing.

At the boom of the cannon, we were off. Here's an awesome video showing what it looked like from above!


This race was a preview to the half  marathon my husband and I will be running together this weekend, so we ran at his pace. Right from the beginning we knew we were going to have fun when we saw flag guy (aka Bryan) - who we would end up running near for most of the race. 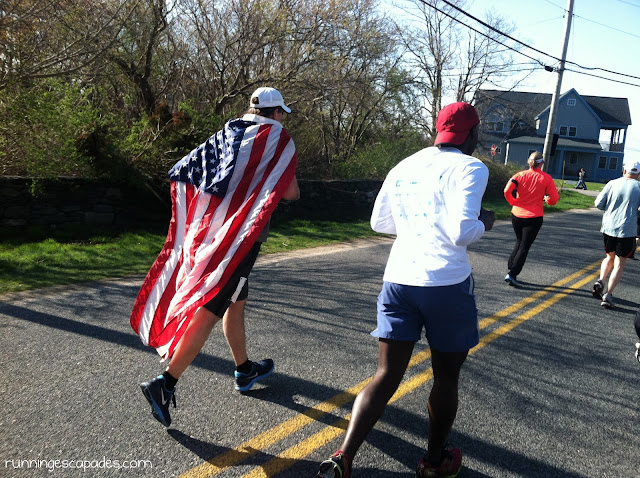 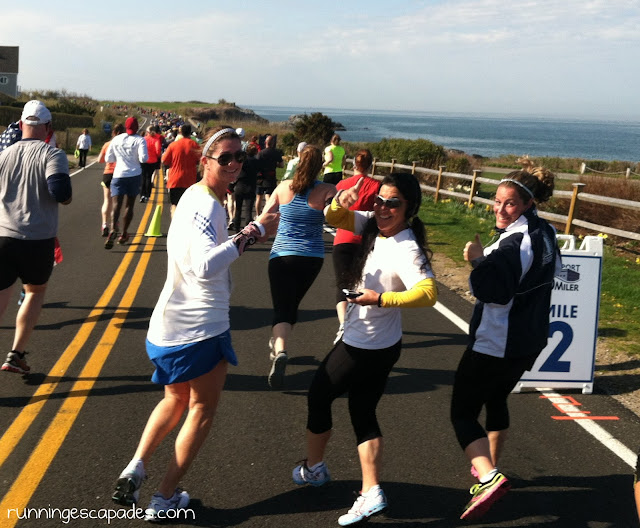 Besides all the fun we were having, we had these beautiful views of the Atlantic as we ran along Ocean Avenue. 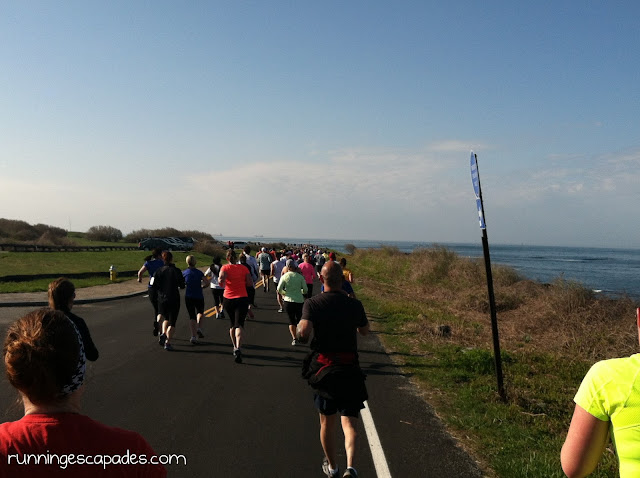 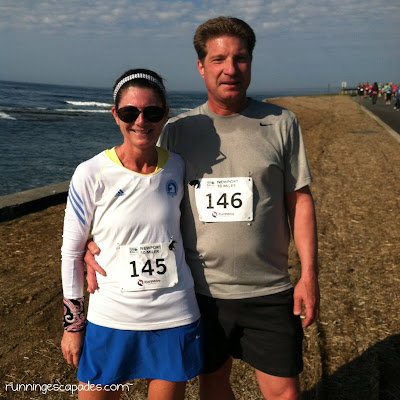 Sadly, my husband forgot his Simple Hydration water bottle and had to use each of the four aid stations, but other than a couple of photo stops he sailed through the miles.

When he realized we were at MILE 6, he couldn't believe it because he was feeling so good. Did I mention that he wears Mizunos too? Enigmas for all you #brilliantrun junkies out there. 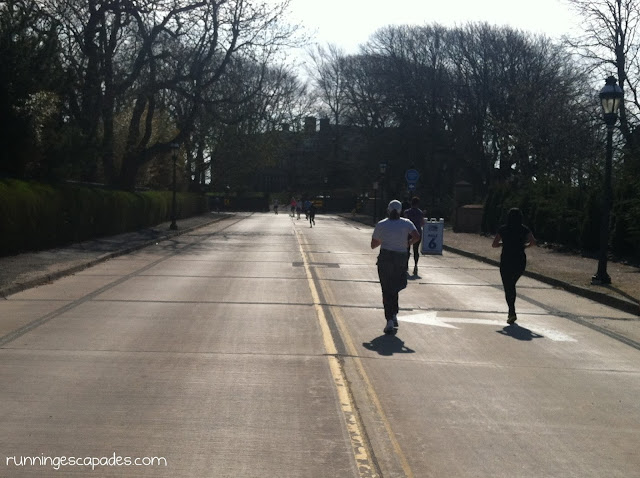 We love Rough Point and had to stop for a quick picture. You never know what you're going to see in the yards of these mansions! (Mile 6: 944) 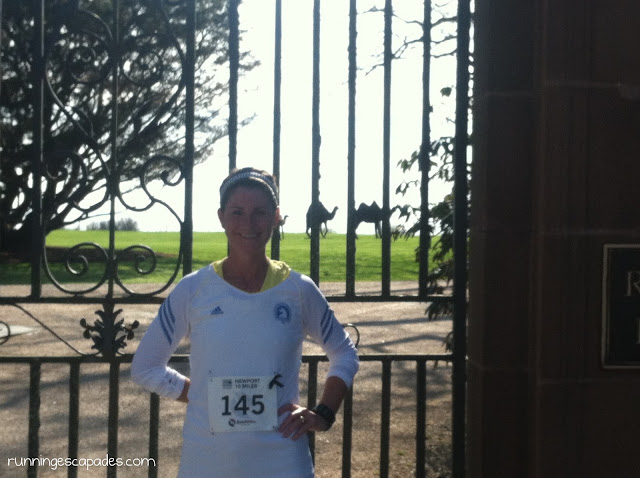 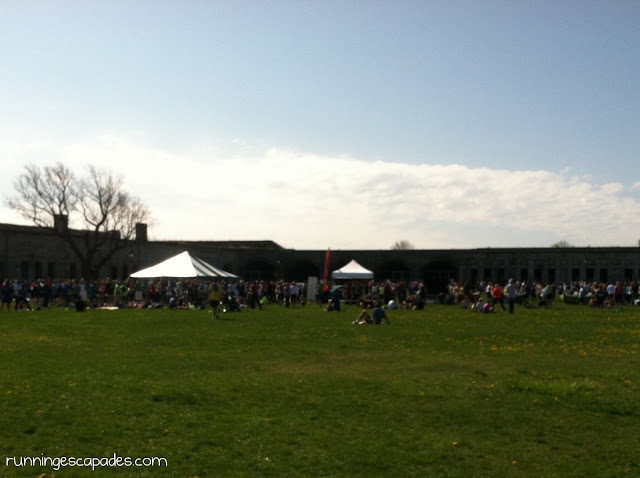 At the finish line we found some post-run yoga to stretch out and eventually found the food tent with bagels (always a favorite) and candy (even better than bagels!). The food tent was small and crowded but there was plenty for everyone. 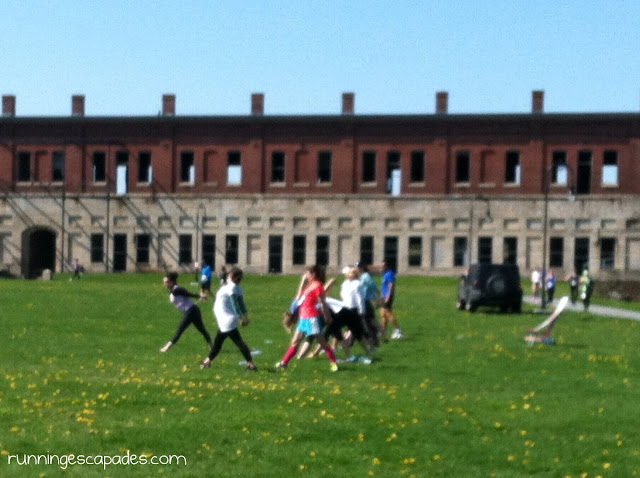 This was a great race. My husband did amazing and I'm so proud of him. It was a great day for running.

The Newport 10 Miler has already announced the date for next year, April 27, 2014. Will you be there?